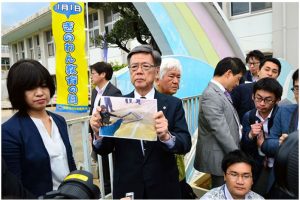 GINOWAN, Okinawa Prefecture–A steel-framed windshield fell from a U.S. military helicopter here Dec. 13 while it was flying over an elementary school.

It narrowly missed a class of children doing gym exercises outside, but a pebble kicked up by the fallen object hit a boy’s hand.

It was the second such incident in the city in less than a week. The item measured 1 meter square.

Okinawa prefectural police were alerted to the fallen object by the Futenma No. 2 Elementary School at 10:10 a.m. The school is located next to the U.S. Marine Corps Air Station Futenma.

The Defense Ministry’s Okinawa Defense Bureau said the windshield was from a CH-53 helicopter.

About 30 fourth-graders were having a gym class in the school grounds at the time, according to the Okinawa prefectural board of education.

On Dec. 7, a small cylindrical object crashed onto the roof of the Midorigaoka nursery school from a U.S. military helicopter. The school is 300 meters from the base. No one was injured.