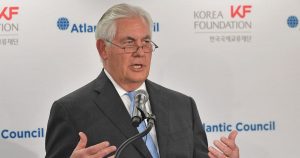 All papers reported on remarks made on Tuesday in Washington by Secretary of State Tillerson in which he stated that the United States is ready to hold its first meeting with the DPRK without preconditions. Asahi wrote that despite the message conveyed by the Secretary, it remains to be seen how the situation will play out, quoting White House Press Secretary Sanders as telling the press that there has been no change in President Trump’s views about North Korea. Asahi also quoted Special Representative for North Korea Policy Yun as telling a senior MOFA official in Tokyo that it is necessary for Pyongyang to take specific actions toward denuclearization in order to hold dialogue. The papers quoted Chief Cabinet Secretary Suga as telling reporters that the U.S. and Japanese leaders are one hundred percent in agreement on their response to North Korea. Nikkei wrote that the statement by the Secretary has created a stir because it could indicate a shift in the Trump administration’s stance that North Korea’s suspension of provocations is a precondition for dialogue. The paper also wrote that the GOJ is worried that following Secretary Tillerson’s remarks there could be a breach in the coalition against the DPRK led by the United States and Japan.