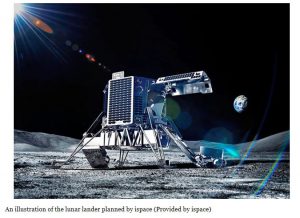 A venture firm plans to become the first Japanese entity to land on the moon and develop into a major international player for space exploration.

Officials of Tokyo-based ispace said Dec. 13 that they were developing a lunar lander that hopefully would make a soft landing on the moon by the end of 2020. It will be designed to explore for resources, such as water, on the moon.

The company’s unmanned lunar lander will be 2 meters tall, about 1.3 meters wide and capable of carrying a payload of about 30 kilograms, the officials said.

In the long term, ispace wants to win contracts from space exploration agencies, such as NASA of the United States, for lunar explorations or the transporting of materials to the moon.

The only nations to have made soft landings on the moon are the United States, the former Soviet Union and China.

Although the Japan Aerospace Exploration Agency (JAXA) is also developing a lunar rover, it is still not near completion.

In the early stages of the project, ispace plans to send a lunar rover into space on a rocket that will be launched early next year. The rocket will also carry a lunar lander made in India.

Toward the end of 2019, the company plans to send its first lunar lander into orbit around the moon.

And a year later, according to the plan, the second lunar lander carrying two rovers will touch down on the moon.

Ispace, which is in charge of the Hakuto team taking part in a Google Inc.-sponsored race to develop an unmanned lunar rover, will use parts from the private sector for the lunar lander and rovers. It said it will keep exploration expenses low by using cheaper foreign rockets for the launches.

Similar lunar plans are being pushed by U.S. venture firms.

Astrobotic is planning to launch a lunar lander in about 2019 to carry payloads at a cost of $1.2 million (about 140 million yen) per kilogram.

Moon Express has plans to bring back samples from the moon’s surface in 2020.