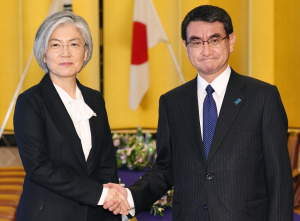 All papers reported on a meeting between Foreign Minister Kono and his South Korean counterpart Kang Kyung-wha in Tokyo on Tuesday. The papers wrote that although the two officials met for three hours, they were unable to narrow the gap over the 2015 agreement on the comfort women. While Kang notified Kono of South Korea’s plan to announce on Dec. 27 the results of its review of the comfort women agreement, Kono stated that it is essential to steadily implement the bilateral accord in which the two nations agreed that the comfort women issue was resolved finally and irreversibly. Mainichi wrote that the ROK minister held a separate meeting with Prime Minister Abe at the Kantei on Tuesday. The paper wrote that although both Abe and Kono called for South Korea’s steady implementation of the comfort women agreement in their meetings with Kang, they did not press her out of concern that a schism between Tokyo and Seoul would only benefit North Korea.

Yomiuri, Nikkei, and Sankei wrote that the two ministers agreed to apply further pressure on North Korea, but Asahi said that Tokyo and Seoul remain divided over how to respond to North Korea’s nuclear and missile programs. Yomiuri and Nikkei also wrote that Kang invited Abe to visit South Korea in February to attend the opening ceremony of the Pyeongchang Winter Olympics, but the prime minister refrained from giving a clear answer and only offered his best wishes for the success of the event.