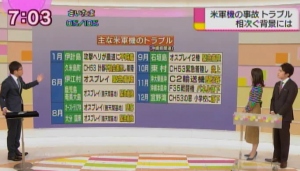 A reporter explaining this year’s mishaps.

NHK carried a 13-minute report this morning on the recent incidents involving U.S. military aircraft in Okinawa. An NHK journalist reported from Okinawa that while flights by CH-53E helicopters were resumed less than one week after the fallen window incident occurred in Ginowan, local residents are becoming increasingly distrustful of the U.S. military. The network showed a list of major incidents involving U.S. military aircraft this year, saying that many of them were serious and more than 20 occurred in Okinawa. The network reported that the number of noise incidents caused by aircraft late at night has more than doubled over the last five years despite the agreement reached between the GOJ and the USG to minimize flights around MCAS Futenma after 10 p.m.

Former senior GSDF official Noboru Yamaguchi said that the U.S. military is probably shifting to more intensive training based on actual battle. “Helicopters and Ospreys are vulnerable to cannons and missiles, so it’s better to operate at night,” he said. “In order to respond to extremely tense situations, night-time training is essential.” He also pointed out that changes in the East Asia situation such as North Korea’s missile launches and China’s maritime advancement are probably behind the increase in night-time training. “The U.S. Navy, Air Force, Army, and Marines have no choice but to conduct high-paced military exercises similar to actual battle conditions with a sense of considerable intensity,” he said. “Training at night is more difficult than during the day just because it’s dark. What they do is also becoming extremely complex…. To put it simply, the number of procedures has increased sharply. I think there is no doubt that the organization as a whole is exhausted.”

Noting that U.S. troops may be overburdened amid the increasingly tense situation in the region, Ryutsu Keizai University Professor Hideki Uemura pointed out that a similar situation was observed during the Iraq War. The network said the helicopter crash at Okinawa International University occurred during that time, adding that Uemura pointed out that the pilot at the time had been on duty for 17 hours for three consecutive days. Uemura said: “The Marines’ operations were very tough and they were overworked. Both the mechanic and the pilot were overburdened.” The network said there is a document that shows the current situation is becoming similar to the situation during the Iraq War, showing a list of Navy Class F flight mishap rates drawn up by the Naval Safety Center. The network said the rate was the highest at 5.00 during the Iraq War in 2004, adding that although it dropped for a time, it is gradually increasing, marking 4.40 in 2017. Uemura was quoted as saying: “I think the situation is similar. This is reflected in the rise of mishap rates.” The network also said the U.S. Marines are facing a shortage of pilots and maintenance personnel. The network said while the U.S. military has concluded that resuming flights by CH-53E helicopters is not problematic because the fallen window incident was caused by human error, both experts believe that the U.S. military needs to thoroughly look into the reasons behind human errors in order to prevent similar incidents from happening again.