Half of Japanese and Americans think bilateral ties are “in good shape,” Yomiuri-Gallup poll 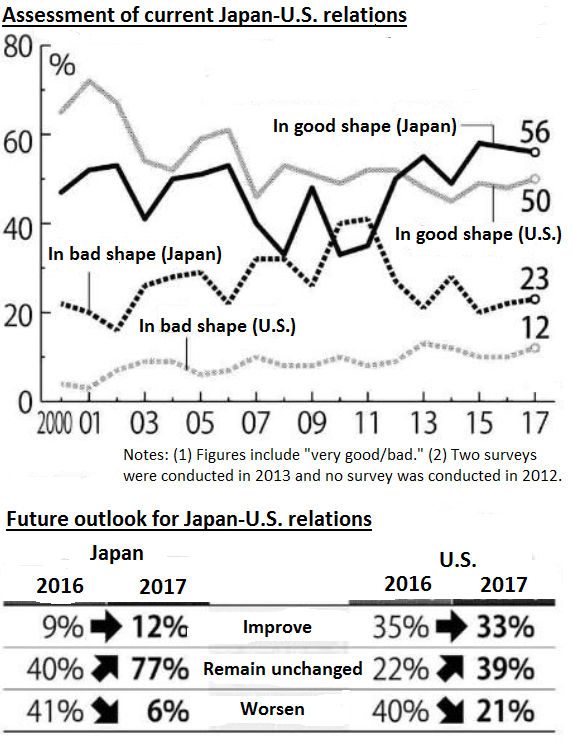 The Yomiuri Shimbun and the Gallup Organization, a U.S. polling company, conducted a telephone-based joint public opinion survey in Japan and the United States. The poll found that there is an increasing sense in both countries that North Korea with its military provocations constitutes a threat. President Donald Trump won the U.S. presidency under the slogan of “America First,” but he has since valued the Japan-U.S. alliance. As a result, fewer respondents were concerned this year about the future of Japan-U.S. relations. Going forward, it will be questioned whether the two nations can cooperate closely on policy regarding North Korea and maintain stable ties.

Difference in degree of trust

Many in both countries took a positive view of their nations’ bilateral relationship. Some 56% of Japanese respondents said Japan-U.S. relations are “in good shape,” essentially unchanged from the 2016 survey when 57% gave that response. The figure is on a par with the 58% found in the 2015 poll, which was the highest figure since the year 2000 when the poll started to be conducted by telephone. Some 50% of Americans also said ties are “in good shape.”

Slightly less than 80% of Japanese said the bilateral relationship would “remain unchanged” going forward, while slightly fewer than 40% of Americans gave that response. Those saying ties will “improve” remained essentially unchanged in each country, with 12% of Japanese (2016 survey: 9%) and 33% of Americans (35%) giving that response. Japanese saying ties will “deteriorate” dropped precipitously to 6% (41%), returning to essentially the same level as in 2015 (7%).

Japanese and American respondents saying ties will “deteriorate” spiked to 40% in the 2016 poll, which was taken right after the November U.S. presidential election. While on the campaign trail, Mr. Trump had repeatedly made extreme statements, including calling for Japan to pay more for the stationing of U.S. forces in Japan. It seems that pessimism among the public has calmed as President Trump has changed to a stance of valuing the Japan-U.S. alliance since taking office.

Asked how much they trust their partner nation, however, respondents in the two countries replied differently. Some 50% of Japanese said they “do not trust” America, up from 43%, while 39% said they did, slightly down from the 42% found last year. Japanese saying they do not trust the United States has not hit or surpassed 50% since the 2008 survey (60%) taken after the United States rescinded its designation of North Korea as a “state sponsor of terrorism.”

[Polling methodology: The survey, both in Japan and the United States, was conducted nationwide over the telephone on a computer-aided random digit dialing (RDD) basis, with people selected from the two countries’ respective voting populations. In both countries, the survey was carried out over landline telephones and cellphones.