The Public Opinion Survey on Diplomacy conducted by the Cabinet Office asked pollees to select from a list of North Korean issues those matters they are interested in. Some 83.0% of respondents said they are interested in missile issues, setting a new high since this kind of question started to be asked in 2008 and increasing 11.5 percentage points from the previous poll conducted in November 2016. Asked if they feel an affinity with the United States, a total of 78.4% said either “strong affinity” or “some affinity,” down 5.7 points from the previous poll.

The Ministry of Foreign Affairs says the poll results for interest in North Korean issues reflect people’s sense of danger over that nation’s repeated firing of ballistic missiles.

“Abduction of Japanese citizens,” which was the most frequently given response last year, dropped to second place at 78.3%, down 2.9 points and the lowest percentage since 2008. Other findings were as follows: “nuclear issues,” 75.3%; “political system,” 44.6%; “North Korean defectors,” 34.5%; and “negotiations to normalize Japan-North Korea diplomatic relations,” 24.8%.

Affinity with the U.S., including pollees saying “strong affinity” and “some affinity,” has been in the 80% range since 2011. 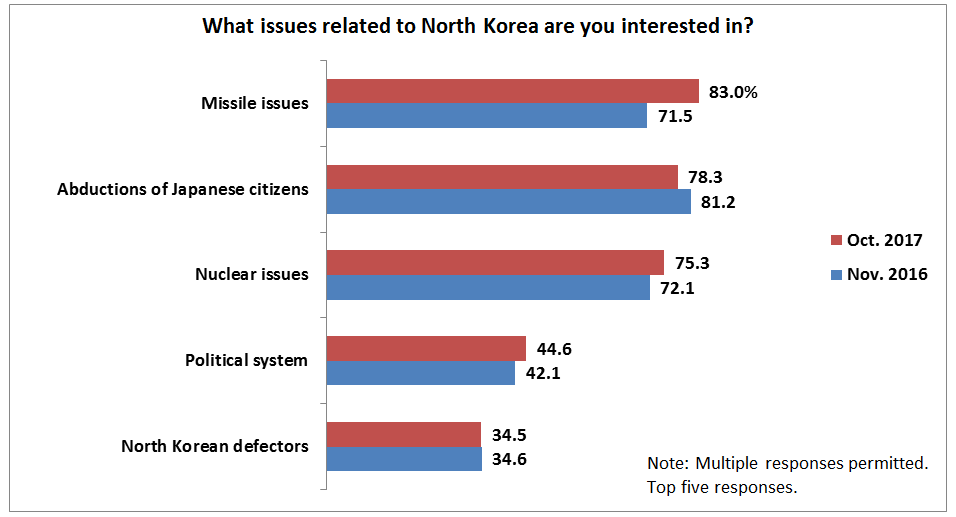