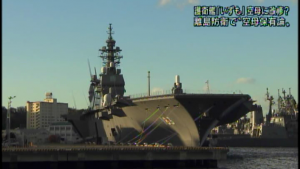 TV-Asahi’s “Hodo Station” took up growing speculation that the Defense Ministry is considering converting the MSDF’s flat-top destroyer Izumo into an “aircraft carrier” where F-35B fighter jets can take off and land. Although Defense Minister Onodera has stressed that no concrete studies are currently being conducted on the proposal, an MOD source said: “It is an idea that has been pursued for many years by an influential former defense minister and others who insist that Japan needs an aircraft carrier to defend remote islands and counter China’s maritime advancement. It would be defensive instead of offensive like those operated by the U.S. military” An unnamed senior MSDF official who is in favor of the proposal said: “Since we don’t have enough money to procure F-35Bs that can be used on aircraft carriers, the conversion would make it possible to offer the carrier as a ‘fueling station’ for U.S. military aircraft…. It would be a mobile runway for the U.S. military.” 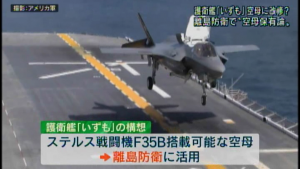 The broadcaster claimed that mainstream MSDF officials have long been opposed to the idea of turning the Izumo into an aircraft carrier based on the view that in defending the Senkakus, it would make more sense for Japan to purchase ground-based fighters and Aegis warships than to acquire an aircraft carrier. Some SDF officials are also afraid that Japan’s possession of an aircraft carrier, even a “defensive” one, would bring about a major change in the nation’s defense arrangements with the U.S. military under which the SDF is primarily responsible for deterring the submarine operations of potential enemies. However, according to a former MSDF commander, some MSDF admirals are so skeptical about the effectiveness of the U.S.-Japan security arrangements that they are anxious to acquire a Japanese aircraft carrier. Regular commentator former Kyodo News Managing Editor Goto said the proposed modification of the Izumo is the latest example of the Abe administration’s strong interest in introducing state-of-the-art defense hardware by capitalizing on North Korea’s ceaseless provocations. The journalist voiced concern that the accelerated military buildup will not only undermine the nation’s exclusively defense-oriented policy but also have an adverse effect on the regional security environment. He also criticized the premier for trying to beef up the SDF without holding sufficient discussions at the parliament.