Amid worries that young people are becoming too inward-looking, some municipalities are using revenue from the “hometown tax” scheme to help local high school and junior high school students study abroad. The programs have a variety of objectives, from supporting long-term overseas study, training workers for the tourism industry, and passing on local history. Some municipalities provide donors with reports written by students who studied abroad. Seeing how students grow and mature can motivate people to keep contributing.

Starting in fiscal 2016, the Fukui prefectural government began soliciting hometown tax donations to help high school students study abroad for one to two years. That fiscal year it received ¥16.12 million from 26 people. Of the six students who submitted written applications and were interviewed, four were selected to study in the United States and China. They received from ¥300,000 to ¥2.5 million each.

Akari Kondo, 17, who is a third-year student at Fukui Commercial High School, spent a year since July last year studying at a high school in Michigan in the United States. “At first there were language barriers, but I gradually got used to things. I experienced real growth by studying abroad,” she said.

The prefecture decided to introduce the system because there was no pre-existing program to support long-term overseas study. The only return gift offered is reports on the students’ progress, but some donors say seeing the students grow motivates them to keep giving.

“Studying abroad can be a turning point in people’s lives, such as by helping them find a future path,” said Masato Degawa, 60, a donor who is an executive of an organization that supports studying abroad.

Starting last fiscal year, the Shizuoka prefectural government has provided hometown tax funds to 91 high school students for overseas study, training at foreign offices of companies based in the prefecture, and other purposes.

“Considering the cost and other factors, not many high school students think about studying abroad. The prefectural government wanted to help them,” a local government official in charge of the program said.

The city of Ginowan in Okinawa Prefecture began in September soliciting about ¥8 million to pay for 10 junior high school students to study in the United States for about a month each. Ginowan currently hosts the U.S. Marine Corps’ Futenma Air Station, and the city wants to train people who can help develop the region after the base is relocated.

On Nov. 20, Harumi Chinen, superintendent of the Ginowan city board of education, attended a publicity event for the program in front of JR Yurakucho Station in Chiyoda Ward, Tokyo. “We want to provide equal opportunities to the children who are responsible for our future,” Chinen said.

Hakuba, Nagano Prefecture, is soliciting donations to pay for second-year students from Hakuba High School, the village’s only high school, to travel to New Zealand for language study. The village is close to the Northern Japanese Alps, which has seen an increase in foreigners who come to visit or live. The village is devoting resources to training people who can connect it with countries overseas.

Takaaki Hoda, an associate professor of commerce at Kobe University who is well informed about the hometown tax scheme, said: “It’s difficult for municipalities to put large amounts of money toward specific matters or individuals because municipalities need to use their limited budgets to implement policies for many people. But the hometown tax, which solicits donations for a stated purpose, makes it easier to carry out such measures. Depending on the objective, projects to overcome unresolved problems could be implemented.”

According to the Education, Culture, Sports, Science and Technology Ministry, the number of high school students studying abroad has been mostly unchanged over the past 20 years, excluding 2008, the year of the collapse of Lehman Brothers, and 2011, the year of the Great East Japan Earthquake. The largest number of students studied abroad for at least three months in fiscal 1992, when 4,487 students went. In fiscal 2015, 4,197 students did so.

For these reasons public-private initiatives have appeared to encourage young people to go overseas. In fiscal 2013, the ministry launched the “Tobitate! (Leap for Tomorrow) Study Abroad Initiative” project, which provides scholarships funded by corporate donations. The company that manages the portal site for the hometown tax scheme started a website to promote studying abroad in September. 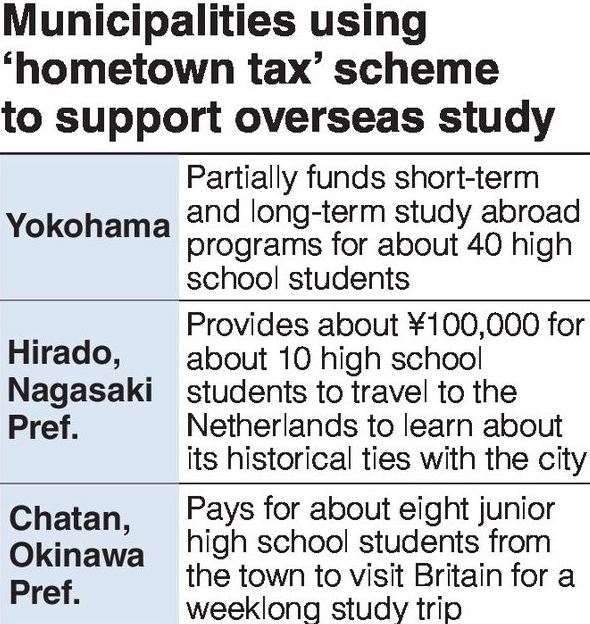 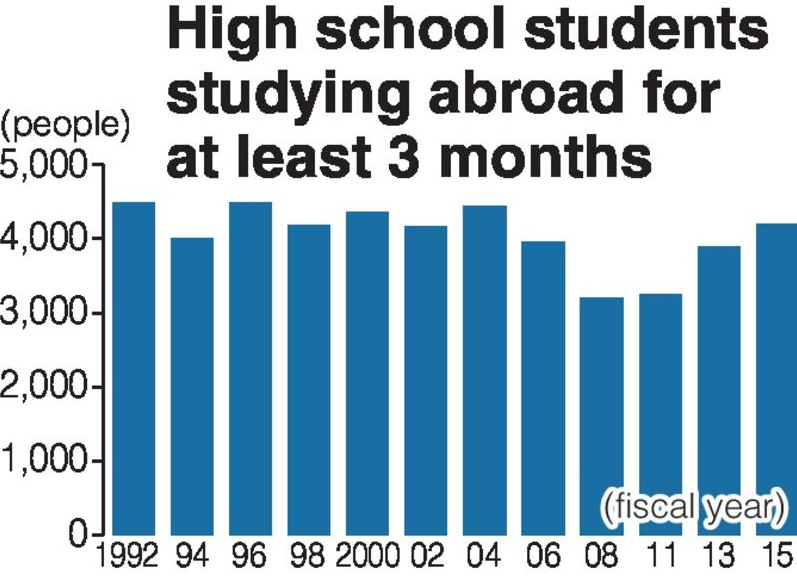