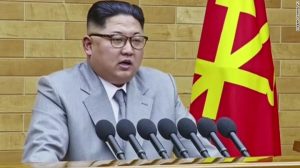 All Wednesday papers reported extensively on North Korean leader Kim Jong Un’s New Year message warning the United States that his country’s nuclear capabilities are now complete and the nuclear launch button is always on his desk. By emphasizing his regime’s nuclear power status, the DPRK leader appeared anxious to deter U.S. military strikes. At the same time, Kim voiced his wish for the success of the PyeongChang Winter Olympics, suggested the possibility of sending North Korean athletes to the sporting event, and underscored the importance of improving inter-Korea relations which he referred to as “frozen.”

Noting that this was the first time for the DPRK leader to show willingness to hold dialogue with Seoul since the launch of the Moon administration last May, the papers said Kim is eager to drive a wedge into the U.S.-ROK alliance by capitalizing on the South Korea leader’s conciliatory approach to his northern neighbor. Nikkei said Kim’s soft attitude toward the South perhaps reflects his frustration with the mounting international pressure orchestrated by the United States, speculating that he is probably aiming to use South Korea to break free from the tightened noose.