Ambassador Hagerty listed among “18 Tennesseans to watch in 2018” 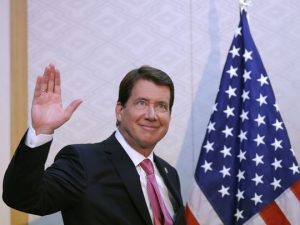 Ambassador Hagerty is one of “18 Tennesseans to watch in 2018,” according to a report by The Tennessean, a daily newspaper based in Nashville. The report, which was published on the paper’s website on Dec. 31, said that “editors and reporters across the USA TODAY NETWORK – Tennessee selected 18 people to watch in 2018, from business and sports to government and entertainment.”

The daily wrote: “Bill Hagerty is just seven months on the job as U.S. ambassador to Japan in President Donald Trump’s administration after being confirmed by the Senate this summer. A former private equity investor from Nashville, Hagerty orchestrated multiple deals with Japanese companies as commissioner of the Tennessee Department of Economic and Community Development under Gov. Bill Haslam that brought business expansion to the Volunteer State. They included Bridgestone Americas, CalsonicKansei North America Inc. and Nissan North America. In his new job, he’ll look to continue strong relations with the U.S. and Japan economically and through diplomacy as nuclear threats from nearby North Korea continue.”