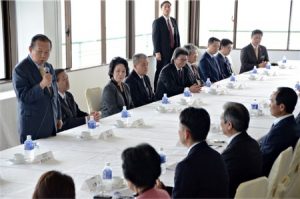 Yomiuri, Sankei, and Tokyo Shimbun reported that LDP Secretary General Nikai and his top two deputies visited Nago in Okinawa yesterday to campaign for a candidate who plans to challenge incumbent Mayor Inamine’s reelection bid in the race scheduled for Feb. 4. The ruling party is set to mobilize as many resources as possible to defeat the anti-FRF municipal leader, with the ultimate goal of unseating Governor Onaga in the gubernatorial race scheduled for this winter. Tokyo Shimbun added that the upcoming race will be the sixth Nago mayoral election in two decades in which the FRF construction off Camp Schwab is the major campaign issue. Inamine defeated his pro-FRF rivals in the two previous races.