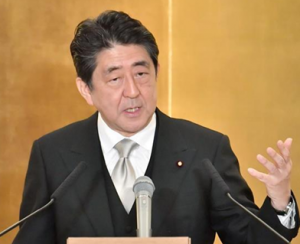 All papers reported on Prime Minister Abe’s New Year’s press conference yesterday, during which he expressed his strong interest in revising the nation’s supreme law at an early date by saying: “I would like to deepen national debate by presenting this year a draft of an ideal constitution that can offer hope for a new era.” While quoting Abe as also saying, “Although the timeframe should not be given priority, the formation of a broad consensus across party lines is expected,” Asahi speculated that this remark reflected the premier’s desire to have the Diet initiate an amendment by the summer of 2019 at the latest when an Upper House election will be held. The paper claimed that the premier is actually aiming to have the ruling LDP draft its own proposal this March so that the parliament can start the process of revision in the extraordinary Diet session in the autumn for a national referendum in the spring of 2019 ahead of the Emperor’s abdication scheduled for April 30, 2019.