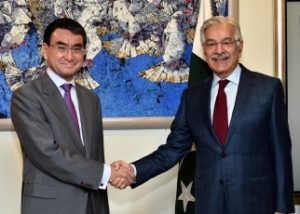 Several papers reported that Foreign Minister Kono held talks with his Pakistani counterpart in Islamabad on Thursday, during which they agreed to increase cooperation in such areas as combatting terrorism to ensure stability in Afghanistan. According to Yomiuri, with President Trump’s recent tweet on terrorists fleeing from Afghanistan into Pakistan apparently in mind, Kono said: “The stability of both Afghanistan and Pakistan is extremely important for regional stability.” Nikkei and Mainichi wrote the Japanese minister also called on Pakistan to strictly enforce UN sanctions on North Korea.