According to the Sankei Shimbun questionnaire survey of 121 major companies, 86% of companies (excluding “no answer”) forecast that the Japanese economy will expand in 2018. Bolstered by strong overseas economies, the Japanese economy will also continue to see moderate recovery, predicted many companies. Deep-rooted caution about the domestic economy was also evident, however. As one retailer commented, “Consumption expenditure is flat and real wages are not increasing either.”

The breakdown of respondents’ views on the 2018 domestic economy is as follows: “expansion,” 3%; “slight expansion,” 83%; and “stagnation,” 14%. No pollees said “slight recession” or “recession.”  Those saying the economy would experience “stagnation” decreased by 21 percentage points from the previous poll conducted in the same month last year, while those saying the economy would see a “slight expansion” increased by 24 points. More and more business leaders are optimistic about the economy, the poll revealed.

This is primarily due to Japan’s continued moderate recovery, which reached 58 months in September 2017 to become the second-longest in the postwar period, surpassing the 57-month-long Izanagi boom, which started in November 1965 during Japan’s period of high economic growth. Another factor is the 26-year high reached in the Nikkei Stock Average in November last year spurred by improved corporate performance.

Companies cited various reasons for their bright forecast. “The domestic economy will recover as capital investment is expected to increase as company performance improves,” said leaders of insurance, materials, transport, and construction companies. Meanwhile, an electrical machinery company said, “Economic expansion will be bolstered by the positive impact of public investment.”

Asked what concerns they have about the future of the economy, many cited overseas trends. A trading firm mentioned “geopolitical risks, including North Korea and the Middle East,” while an insurance company pointed to “concern over a slump in U.S. economy” and an automaker cited a “slowdown in the Chinese economy.” (Abridged)

[Translator’s note: No information was given on the polling methodology.] 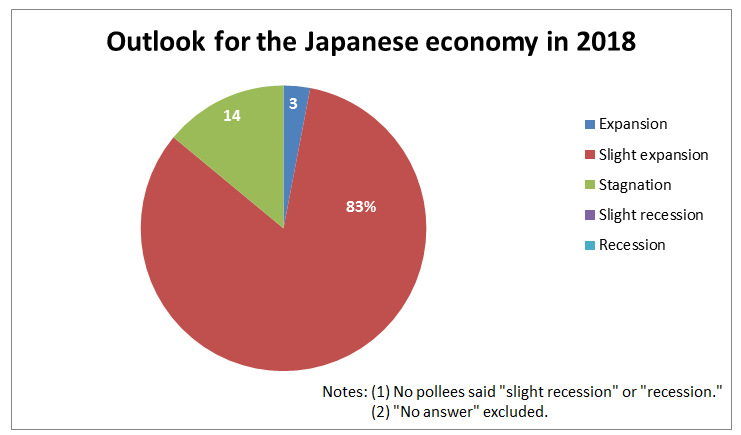 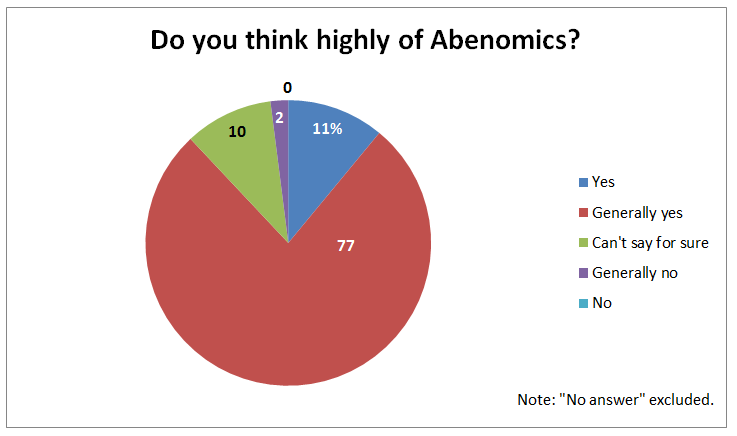