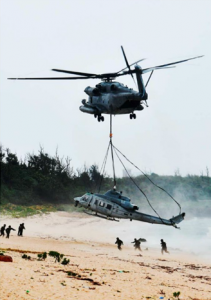 All papers reported over the weekend and on Monday that a USMC helicopter based at MCAS Futenma made a precautionary landing on a beach on Ikeijima, Uruma, on Saturday afternoon, as a warning light in the cockpit indicated that the main rotor was moving at an abnormal speed. None of the four crewmembers were injured. The UH-1 landed at a spot about 100 meters from the nearest residence. The papers underscored that this is the latest in a series of accidents and incidents involving U.S. military aircraft in Okinawa in the past year or so, noting that a separate Futenma-based helicopter made an unscheduled landing on the same island almost a year ago. Today’s dailies said the helicopter was airlifted by a CH-53 to the White Beach Naval Facility yesterday. 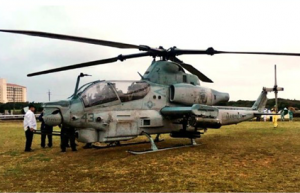 Today’s papers highlighted a similar mishap involving a Futenma-based AH-1 aircraft on Monday afternoon, explaining that the attack helicopter made a precautionary landing at an industrial waste disposal facility in Yomitan after a warning light indicated a mechanical problem. The landing site was about 300 meters from the nearest residence and no injuries were reported. Defense Minister Onodera told the press last night that he has strongly asked the U.S. military to conduct through inspections and maintenance of its aircraft and take effective measures to prevent a recurrence. According to Sankei, the minister added that he will visit Hawaii in the near future to press PACOM Commander Harris to ensure the safety of military flights. According to Okinawa Vice Governor Tomikawa, Okinawa Area Coordinator Nicholson apologized over the phone last night for the two incidents. The prefectural government is set to ask the Okinawa Defense Bureau today to suspend all U.S. military flights.