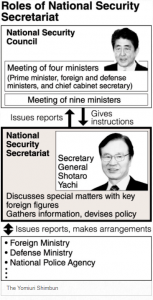 The National Security Secretariat is an increasing presence in the foreign and security policies of the administration of Prime Minister Shinzo Abe, with Shotaro Yachi, the organization’s secretary general, earning the prime minister’s trust.

The organization on Sunday entered its fifth year since its establishment as a secretariat of the National Security Council (NSC), which plays a leading role in the government’s foreign and security policies. At a meeting at a Tokyo hotel on Friday, Abe said, “I’d like to make 2018 a year in which both the Japanese and Chinese people perceive that bilateral relations have greatly improved.”

This year marks the 40th anniversary of the signing of the Japan-China Peace and Friendship Treaty. Abe aims to realize reciprocal visits by top leaders from the two countries. The prime minister plans to soon dispatch Yachi to China for negotiations with Chinese State Councillor Yang Jiechi, who oversees China’s foreign policy.

The secretariat was founded in January 2014 to support the NSC, which was established in December 2013.

Yachi served as vice foreign minister in the first Abe Cabinet and assumed his current post as the first secretary general at the wish of the prime minister.

The secretariat collects and analyzes information from the Foreign Ministry, Defense Ministry and other agencies, and reports its findings to the NSC. Yachi occasionally met with Abe last year to discuss North Korea’s missile launches.

Yachi’s strength lies in his network of connections with high-ranking officials and important persons abroad, which he cultivated during his tenure at the Foreign Ministry.

Late last year, a South Korean Foreign Ministry taskforce released a report on the 2015 Japan-South Korea agreement on the issue of comfort women. According to the report, Yachi contacted an aide to former South Korean President Park Geun-hye eight times from February 2015 to discuss the agreement’s wording.

Speaking of Yachi, Abe was quoted by an aide as saying: “Even when we disagree on diplomatic strategy, Mr. Yachi ultimately acts on my intentions. He offers me reassurance.”

The government is scheduled to review the National Defense Program Guidelines at the end of this year.

The Defense Ministry took the lead in past reviews of the guidelines, but the secretariat will oversee the upcoming revision. The secretariat is also likely to influence the government’s decision on whether to possess the capability to attack bases in enemy territory.

Yachi, 74, is expected to remain in his post for the time being. However, some within the government have said there is an urgent need to cultivate a successor.