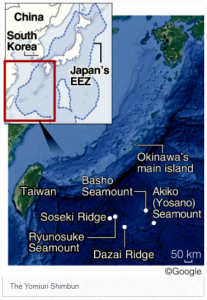 GENEVA — A subpanel of the International Hydrographic Organization (IHO), in charge of deciding standardized names for undersea features (see below), released the results of its screening Thursday, with 34 Japanese applications accepted.

The Japanese names accepted by the Sub-Committee on Undersea Feature Names (SCUFN) include ones named after Japanese literary giants such as “Soseki Ridge” and “Ryunosuke Seamount” in the south of Okinawa Prefecture.

The waters, where the SCUFN-accepted undersea features named after great Japanese writers are located, are in a boundary area of the nation’s exclusive economic zone (EEZ).

In recent years, China has accelerated moves to conduct research on undersea features and give them Chinese names. A Chinese name has in fact been given to a nearby seabed.

Japan’s bid to give undersea features in the area Japanese names was intended to counter such moves by Beijing.

According to the naming principles of the Monaco-based IHO, groups of undersea features with shared physiographic characteristics can form a “province” by naming them collectively in specific categories such as historical people like musicians and writers.

The geographic group, including undersea features named after Japanese writers and accepted by SCUFN this time as well as “Yasunari Seamount” accepted in 2014, is now internationally approved as “Great Writers Seamount Province.”

Meanwhile, China filed applications for giving Chinese names to undersea features in the Southern Kyushu-Palau Ridge Region, which is situated south of Okinotorishima. Of the applications, six were accepted.

Japan has requested that the U.N. Commission on the Limits of the Continental Shelf extend its continental shelf in the region, based on Okinotorishima. But China and South Korea have repeatedly opposed the move, claiming that Okinotorishima is a rock, not an island. Given that, the U.N. body has postponed the examination.

South Korea also received approval for four of its applications, two of which are for undersea features near the east coast of the country.

In the applications, Seoul specified that the undersea features are in the “East Sea,” without calling the ocean “the Japan Sea or Sea of Japan,” the standard terms used by the IHO. A representative of the Japanese government therefore protested, saying that it is unacceptable because the “Sea of Japan” is the only internationally established term.

Mountains, valleys and other features on seabeds have different names than those on the ground. A conical form higher than 1,000 meters from the sea floor is referred to as a seamount; an elevation smaller than a seamount is called a knoll; and an elongated narrow elevation is called a ridge. Many undersea features are related to submarine volcanic activities.