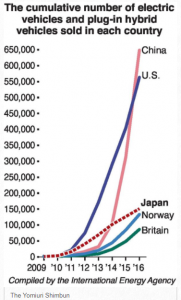 The Tokyo metropolitan government plans to boost the spread of electric vehicles (EVs) by such measures as free installation of charging devices at condominiums, in an effort to achieve zero sales of gasoline-powered vehicles by the 2040s, according to informed sources.

The sources said that the Tokyo government plans to include ¥1 billion in the fiscal 2018 budget to cover relevant expenditures. In light of the global trend toward phasing out vehicles using gasoline — particularly in Europe and China, where the shift to next-generation vehicles (see below) such as EVs is accelerating — Tokyo hopes to lead efforts in Japan.

According to the International Energy Agency, cumulative sales of next-generation vehicles are estimated to reach as many as 20 million units in 2020. In July last year, both Britain and France announced they will end sales of gasoline and diesel cars by 2040.

In September last year, China, the world’s largest auto market, said it would impose fixed production quotas for next-generation vehicles on automakers, making it clear that a shift to EVs is part of its national strategy.

In Japan, cumulative sales of EVs and similar vehicles were about 150,000 in 2016. The diffusion rate of such vehicles in Japan is 0.59 percent, or less than half that of countries such as Britain and France. In Japan, 90 percent of EV owners live in detached houses. The Economy, Trade and Industry Ministry and Tokyo metropolitan government believe that installing charging devices at condominium complexes is the key to popularizing EVs.

In Tokyo, 130,000 condominium buildings accommodate 60 percent of the city’s population. The national government launched a measure to subsidize the cost of purchasing or installing charging devices in fiscal 2012. However, only 30 such devices in 16 locations have been built in Tokyo under the measure as of March 2017. One challenge to installing charging devices at condominiums is the cost that residents must bear. Another is that installing the device requires the consent of three-quarters of a condominium’s unit owners.

The Tokyo government will also begin a program to dispatch experts such as certified condominium management consultants to condominiums’ homeowners associations to help facilitate smooth discussions on installing the devices.

Increasing charging devices outside of residential areas is also considered important. According to a council consisting mostly of automakers, a total of 7,332 fast charging devices were installed in locations such as shopping malls throughout Japan as of September last year. From fiscal 2018, the metropolitan government will install charging devices at facilities such as parks and hospitals that it runs.

Automakers are also accelerating the shift towards EVs. Honda Motor Co. has announced that sales of EVs will account for two-thirds of its total sales by 2030, while Nissan Motor Co. said that EVs will account for 30 percent of its total sales by 2022. In December last year, Toyota Motor Corp. announced a goal of EV sales of 5.5 million vehicles, or about half of its global sales, by around 2030.

The Tokyo government also plans to expand its subsidies for purchasing next-generation vehicles such as EVs and fuel-cell vehicles, in an effort to encourage purchases of such vehicles.

Tokyo Gov. Yuriko Koike said in an interview, “We want to create an environment where people don’t have to purchase gasoline cars in the 2040s.”

These vehicles include electric vehicles (EVs) that are run solely by electric motors, as well as plug-in hybrid vehicles (PHVs) that mostly run on electricity and carry batteries capable of being charged with outside electricity. They also include fuel-cell vehicles (FCVs) that generate electricity using hydrogen as fuel.