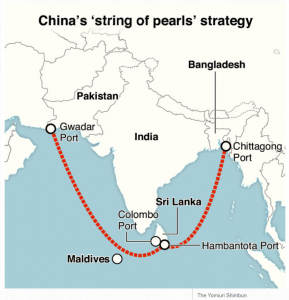 COLOMBO — Foreign Minister Taro Kono toured Pakistan, Sri Lanka and the Maldives, announcing during the trip offers of assistance with infrastructure development and other projects.

Kono urged the three nations, which all face the Indian Ocean, to cooperate under the “free and open Indo-Pacific strategy” advocated by the Japanese government.

Kono’s move was prompted by the government’s increasing vigilance against China, which has been strengthening its influence over these countries with huge amounts of aid money based on its “string of pearls” (see below) marine strategy.

On Saturday, Kono became the first Japanese foreign minister to visit the Maldives. In a meeting with Maldivian Foreign Minister Mohamed Asim, Kono said Japan views the Maldives as a strategically important point in the sea-lanes that connect Asia, the Middle East and Africa, and intends to support its social development in terms of the environment and other areas.

Before traveling to the Maldives, Kono on Thursday visited Islamabad, where he met with Pakistani Foreign Minister Khawaja Muhammad Asif and told him infrastructure improvement is an important part of Japan’s assistance.

The following day, Kono visited Sri Lanka’s largest city, Colombo, and inspected Colombo Port, which has the largest container volume in South Asia. He conveyed to the Sri Lankan government Japan’s intention to participate in a project to expand the cargo terminal.

Kono’s announcements of assistance to the three countries were made in response to China’s investment in the development of ports and other facilities overseas. China is believed to provide funds also to nations that have no capacity to repay investments to obtain interests in those countries in exchange.

A senior official of the Japanese Foreign Ministry said: “If stakes in each country’s port facilities are transferred to China, the number of China’s military strongholds would increase. China’s string of pearls strategy allows its navy to establish strategic deployments in waters across the region.”

While the Japanese government adopts a stance of readiness to cooperate with China’s massive Belt and Road economic zone initiative, it has kept a cautious attitude toward coordination in improving port facilities in a third country.

On Friday, Kono told reporters in Colombo, “The sea-lanes are important from commercial and security perspectives. Japan doesn’t want Sri Lankan ports to be used exclusively by China.”

China’s marine strategy to position the Indian Ocean as a strategically important place for its maritime transportation is referred to as a “string of pearls” because the port locations China has eyed for investment in the region resemble the shape of a pearl necklace. China aims to deepen relationships with countries along the sea-lanes and secure the functions of their port facilities.