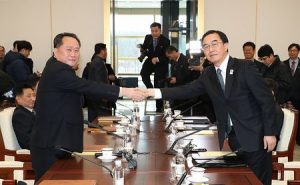 All papers gave prominent front- and inside-page play to the inter-Korean talks held at Panmunjom yesterday, during which the two parties agreed on North Korea’s dispatch of high-ranking officials, athletes, and a cheering squad to the PyeongChang Winter Olympics, the convening of a meeting by military authorities to ease tension and avoid inadvertent clashes, and continued bilateral “dialogue and negotiations” for resolving issues of mutual concern on the Korean Peninsula. Pointing out that these agreements were released in the form of a “joint press statement,” Yomiuri speculated that the phrase “dialogue and negotiations” reflected Pyongyang’s intention to exclude the United States. The Kim regime is reportedly set to capitalize on its participation in the Olympics to court its southern neighbor with the goal of evading enhanced international pressure.

Japan determined to maintain pressure on North Korea in coordination with U.S.

All papers wrote that in response to agreements reached in the inter-Korean talks yesterday, the GOJ is poised to maintain its hard line toward North Korea in the belief that its latest overtures are probably intended to buy time for completing its nuclear and missile programs. Yomiuri said Tokyo will seek to join hands with the U.S. in asking the international community to step up the pressure on Pyongyang at a UN Command meeting on North Korea to be held in Vancouver next week. Foreign Minister Kono told the press yesterday that he would like to stress the importance of applying maximum pressure. The minister is reportedly seeking to hold a meeting with his ROK counterpart on the margins of the meeting.

Asahi said the Trump administration is worried that South Korea may be tempted to ease pressure on North Korea in the face of its charm offensive, quoting an unnamed State Department official as saying that Washington will carefully watch whether the North will handle future dialogue with South Korea sincerely. Nikkei wrote that the USG is determined to ratchet up the pressure on Pyongyang, predicting it will conduct joint drills with South Korea after the PyeongChang Paralympics. Sankei wrote that Washington is bound to react sharply to the North’s statement in the inter-Korean meeting that its nuclear missiles and other weapons are directed at the United States. The daily took up a telephone briefing Monday by Senior Policy Advisor to the Secretary of State Brian Hook, in which he explained that the Trump administration is committed to continuing the pressure campaign so as to draw the DPRK to meaningful negotiations with the ultimate goal of achieving the final, verifiable, and irreversible denuclearization of the Korean Peninsula. The U.S. diplomat reportedly acknowledged that the pressure campaign will probably become prolonged in the face of North Korea’s defiance.