Profile of Hiroaki Nakanishi, selected as next Keidanren chief 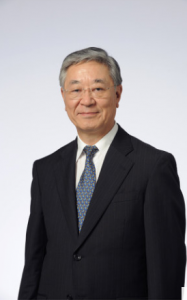 “I think I’ve taken on a big role,” said Hiroaki Nakanishi, 71, who was appointed the next chairman of the Japan Business Federation [Keidanren]. “I want to strongly push economic recovery forward,” Nakanishi added, expressing his resolve when he met the press in Tokyo on Jan. 9.

Nakanishi entered Hitachi, Ltd., in 1970 and started his career from a plant as a computer engineer. His first important task was to develop the Shinkansen Traffic Management System for the former Japan National Railways. He overcame various difficulties developing the system by working with his colleagues both inside and outside Hitachi. “My experience in those days propped me up , and that’s the origin of my love for Hitachi,” he recalled. Back in the 1990s, Nakanishi began to experience a number of overseas assignments at Hitachi’s affiliates in the U.S. and the UK, accumulating his international experience.

Affected by the 2008 economic crisis caused by the bankruptcy of Lehman Brothers, Hitachi reckoned up a final deficit of nearly 800 billion yen for the fiscal term ending March 2009. As vice president, Nakanishi worked together with then Chairman and President Takashi Kawamura, 78, currently Chairman of the Tokyo Electric Power Company, to turn Hitachi around.

After taking over the president’s position from Kawamura, Nakanishi moved the company forward with “choice and concentration.” For example, Nakanishi streamlined Hitachi’s businesses vulnerable to unstable markets, such as TV and hard disk drive, and at the same time focused on infrastructure business, such as railway, power generation, and information and communications. As result, he achieved Hitachi’s present-day prosperity. His abilities are highly evaluated in the business community.

Nakanishi graduated from the University of Tokyo Faculty of Engineering and completed a U.S. Stanford University postgraduate course. He joined Hitachi, Ltd., in 1970, became Hitachi president in 2010 and chairman in 2014. His hobby is mountain climbing.