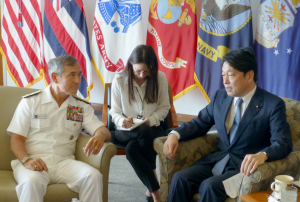 All national dailies in their Wednesday evening editions reported on talks held between the Commander of the U.S. Pacific Command, Adm. Harry Harris, and Defense Minister Onodera in Honolulu on Tuesday. Asahi and Nikkei wrote that according to Onodera, Adm. Harris commented on the postponement of joint military exercises between the United States and South Korea during the PyeongChang Winter Olympics by saying that there is no change in the plan to conduct the drills after the Olympics.

According to Asahi, Mainichi, and Yomiuri, Adm. Harris and Minister Onodera also discussed the recent incidents involving U.S. military helicopters in Okinawa. Asahi reported that at the outset of the meeting that was open to the press, Onodera called for safe aircraft operations and the admiral said it is regrettable that the aircraft incidents occurred in Okinawa. The paper wrote that Adm. Harris reportedly added that the number of U.S. military aircraft accidents has been on the decline since 2016 and that he is satisfied that the pilots managed to land the aircraft in safe places in response to emergencies. Mainichi wrote that Onodera told reporters after his meeting with the U.S. Pacific commander that it is important to land an aircraft in a safe place as soon as possible to run safety checks rather than to continue flying after a warning light comes on.

In a related development, this morning’s Mainichi wrote that Okinawa Vice Governor Tomikawa lodged a protest with the defense and foreign ministries on Wednesday over the latest incidents involving U.S. military helicopters.