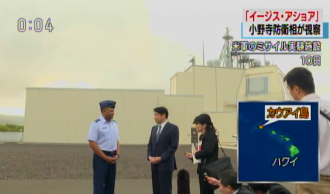 NHK and Fuji TV reported at noon that on Wednesday Defense Minister Onodera visited on Kauai Island in Hawaii a test facility for the Aegis Ashore system, which the GOJ has decided to introduce in the future. NHK said the defense chief was briefed by Lt. Gen. Greaves, the Pentagon Missile Defense Agency director, adding that he examined the computer system that transmits orders to interceptor missiles and the latest SPY-6 radar currently under development. The network quoted Onodera as telling reporters afterwards that while the GOJ is currently thinking of using the system for ballistic missile defense, it is hoping “to develop the system as a basic infrastructure that can serve various missile defense purposes,” including defense against cruise missiles.