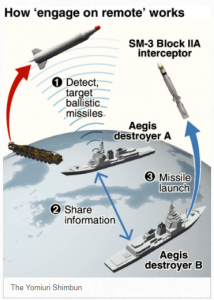 The government is making arrangements to introduce a new missile intercept system on two new Aegis-equipped destroyers that will be deployed in fiscal 2019 and 2020, The Yomiuri Shimbun has learned.

According to several government sources, the new intercept system will improve the ability of the Maritime Self-Defense Force’s Aegis vessels to protect the nation if North Korea launches a wave of ballistic missiles.

Aegis vessels equipped with SM-3 interceptors form the main pillar of Japan’s missile defense system. Although these destroyers already share radar information, launching an SM-3 requires the vessel actually firing the missile to use its own radar to lock on to the target.

The United States developed the new system, which is called “engage on remote.” This sophisticated information system enables an Aegis destroyer to target a missile and fire an interceptor based on radar information provided by another Aegis vessel closer to the missile launch site. The U.S. Navy plans to steadily introduce the engage-on-remote system to its Aegis vessels.

The Defense Ministry is considering a plan to eventually have the MSDF and U.S. Navy Aegis vessels share targeting information through this new system. However, the U.S. side could be reluctant to accept such a proposal because a U.S. vessel intercepting a missile based on targeting information shared by an MSDF vessel would also be entrusting command to Japan. Consequently, the government intends to carefully gauge the U.S. side’s intentions on this issue.

The MSDF currently has four Aegis destroyers for the nation’s missile defense. One or two are engaged in warning and surveillance activities in the Sea of Japan. Each can hold a maximum of eight SM-3 interceptors.

Under the new system, even if Aegis vessels in the Sea of Japan were to use up all their missiles, it is expected that Aegis vessels stationed in the Pacific Ocean or other distant waters could shoot down a target. This would boost the number of interceptors available to counter a volley of missiles launched by North Korea.

Japan will have a fleet of eight Aegis destroyers in 2020, following the construction of new ships and upgrades to others. The engage-on-remote system will be introduced to the two new vessels scheduled to be completed in fiscal 2019 and 2020 at a cost of about ¥170 billion each. The government is considering introducing the new system to the other vessels during upgrades. The two land-based Aegis Ashore units that will start operating from about fiscal 2023 are also likely to be linked to the new system, the sources said.

In fiscal 2021, Japan will start deploying new SM-3 Block IIA interceptors with a range of about 2,000 kilometers — triple the range of SM-3 missiles. Combining these new interceptors with the new system will enable Aegis destroyers stationed at a distance to shoot down missiles fired toward Japan.