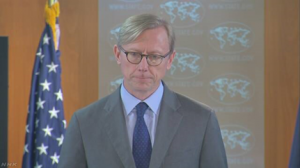 NHK reported on a press briefing on Thursday by DOS Director of Policy Planning Brian Hook regarding the UN Command meeting on North Korea to be held in Vancouver next week, quoting him as saying that the goal of the ministerial is to provide a practical mechanism to exert continued pressure on the Kim regime. The official reportedly projected that such measures as enhanced inspections of ships carrying materials to North Korea will be discussed so as to prevent smuggling of the sanctioned items to the Kim dynasty. He added that the U.S. and its partners are committed to continuing the pressure campaign until Pyongyang clearly shows that it intends to abandon its nuclear program.