According to the latest Yomiuri Shimbun survey, 83 percent of respondents supported the Japanese government’s stance of refusing additional demands from the South Korean government regarding the 2015 Tokyo-Seoul agreement on the comfort women issue.

Eleven percent did not support the government’s position.

The survey was conducted nationwide from Friday through Sunday using a random digit dialing method.

Respondents in favor of Tokyo’s stance stood at 88 percent among those in favor of Prime Minister Shinzo Abe’s Cabinet and at 80 percent even among those not in favor of the Cabinet. The percentage of support was high regardless of pollees’ gender and generation.

“A final and irreversible solution” to the comfort women issue was confirmed in the 2015 deal. South Korean President Moon Jae In has set out a new policy to effectively seek further measures from the Japanese side, saying he urges Japan to resolve the issue. Tokyo has said that is completely unacceptable.

In the Yomiuri poll, those who said they were unconvinced by Moon’s policy stood at 86 percent. A total of 78 percent of respondents said South Korea was either “not very trustworthy” or “not trustworthy at all.”

This is nine percentage points higher than the corresponding figure among Japanese pollees in a May 2017 survey that was jointly conducted with the same dialing method by The Yomiuri Shimbun and The Hankook Ilbo, a South Korean newspaper.

Asked which of the two options — dialogue or pressure — should be emphasized to get North Korea to stop its nuclear tests and missile launches, respondents in favor of pressure stood at 50 percent, exceeding the 40 percent in support of dialogue. In the previous survey conducted from Dec. 8 to 10 last year, those supporting pressure stood at 46 percent and for dialogue at 43 percent.

Forty-seven percent of the pollees said they positively evaluated the Cabinet’s economic policy, higher than the 40 percent who said they did not. However, as many as 73 percent said they did not actually feel the effects of economic recovery.

Forty percent of respondents said they did not support any political party, one percentage point up from the previous survey. 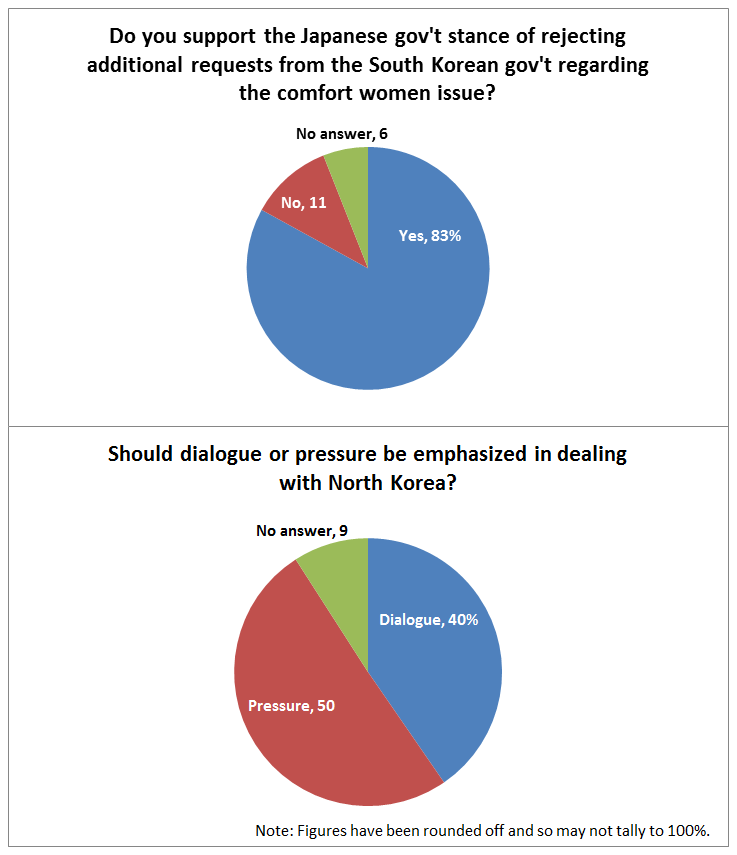