The Nikkei conducted a public opinion poll of about 70,000 voters to probe their views around the time of the October 2017 Lower House election. Analysis of this data reveals trends in public sentiment. Using this and other data, this three-part series aims to confirm whether the generalizations often made in political circles about the relationship between population density and the Liberal Democratic Party (LDP) support rate, regional disparities in views on constitutional amendment, and differences in the LDP support rate by gender and age group are truly accurate.

Kagoshima Prefecture’s District 4 includes the eastern segment of the prefecture as well as Tanegashima and Yakushima. LDP Diet Affairs Committee Chairman Hiroshi Moriyama, who has represented the district at the Diet for six consecutive terms, says, “The political groups and farmers in the constituency are members of my family. Support for the LDP is deep-rooted, so it is hard for fads that arise in urban areas to gain ground here.” With its many depopulated municipalities, Kagoshima Prefecture’s District 4 has a population density of 109.9 people per square kilometer, making it the 26th least populated of the 289 Districts in Japan. The LDP support rate in this district is 51%, above the national figure of 39%.

Tokyo’s District 10 is home to Toshima City. [LDP] Lower House member Hayato Suzuki, who represents the district, says, “Even urban areas have some pockets where politicians have deep personal ties with the people. I try to have close personal ties with the people living in my constituency.” Tokyo’s District 10 includes Ikebukuro, which is known for its many commercial facilities and high-rise condos. The district has the second highest population density in the nation at 19,297.1 people per square kilometer. The constituency’s LDP support rate is 31%, which is below the national rate.

Rule of thumb in political circles

In Eastern Japan, geographical factors seem to have little impact in rural areas because there are many constituencies where former Democratic Party of Japan (DPJ) Diet members originally affiliated with the LDP have developed a strong base over numerous years. In Western Japan, the LDP has a strong footing in rural areas, while in Osaka Prefecture and other urban areas Nippon Ishin (Japan Innovation Party) has a solid presence and the LDP support rate is relatively low.

Kobe University Professor Yosuke Sunahara says: “Since the introduction of the single-seat constituency system, it has been thought basically that the LDP is weak in urban areas.” The DPJ, by targeting urban areas where there are dramatic movements of population, expanded its support in cities in the 2000s and new parties established by local government leaders, such as Nippon Ishin, have expanded their support in urban areas since the collapse of the DPJ administration in 2012.

But this correlation is gradually weakening. The correlation coefficient at the time of the 2012 Lower House election was -0.26 in Eastern Japan and -0.54 in Western Japan, both of which indicate a stronger negative correlation than the recent poll’s coefficients do. Professor Sunahara says, “This is because the urban areas were divided up among the opposition parties and the LDP put together an urban-friendly strategy.”

LDP support rate linked to rate of change in population 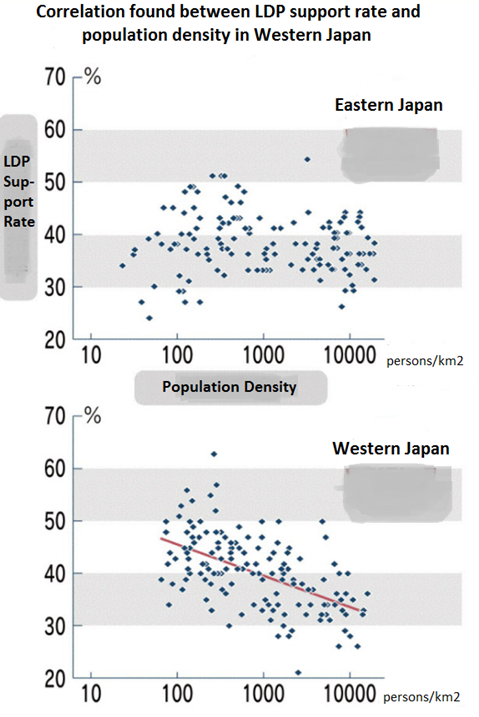 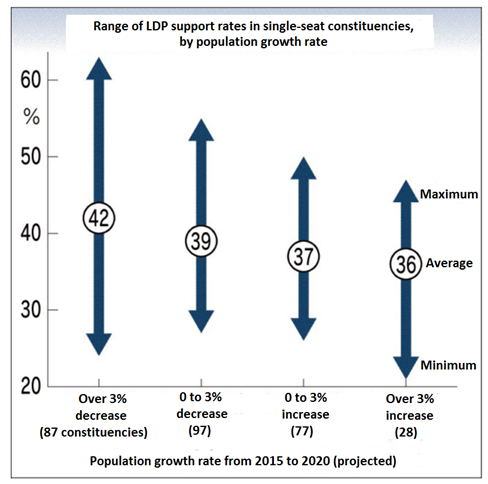