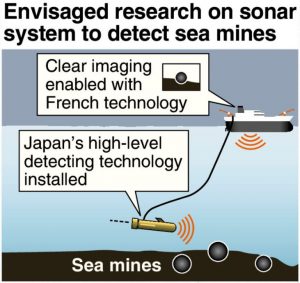 The Japanese and French governments plan to launch joint research next fiscal year on a new undersea sonar system that utilizes improved technology for detecting mines on the seabed, according to sources.

The two countries are expected to broadly agree on the joint research at a so-called two-plus-two meeting of their foreign and defense ministers to be held in Tokyo on Jan. 26. Should a contingency occur on the Korean Peninsula, sea mines could be laid in the Sea of Japan. The government plans to enhance the Maritime Self-Defense Force’s minesweeping ability.

This would be Japan’s first joint research on defense equipment and technology with France. Low-frequency sonar systems developed in Japan excel at detecting sea mines, but have problems showing clear images. French-made high-frequency sonar systems, meanwhile, are said to utilize high-level imaging technology. The two countries intend to combine their respective strengths to develop a high-performance sonar system. They plan to determine whether they will jointly develop a sonar system for practical use after conducting joint research for two years beginning next fiscal year.

Should North Korea lay mines in the Sea of Japan amid a contingency on the Korean Peninsula, the operations of U.S. aircraft carriers and other vessels could be hampered. In such a case, the United States would likely ask the MSDF to cooperate in minesweeping operations. It is hoped that Japan will develop a sonar system capable of detecting sea mines with a high degree of accuracy.

In April 2014, the Cabinet adopted the “Three Principles on Transfer of Defense Equipment and Technology” on the overseas transfer of defense equipment, including arms technology. Japan subsequently launched joint research on defense equipment and technology with other countries. If the envisaged research were to begin, France would be the fourth country — after the United States, Britain and Australia — to conduct such research with Japan.

At the upcoming two-plus-two meeting, the Japanese government intends to strengthen cooperation with France on the North Korean issue, the sources said. France has territories and bases in the South Pacific Ocean. Through defense cooperation with France, Japan apparently aims to push back against China, which has accelerated its maritime expansion.

During the two-plus-two meeting, Japan and France are also expected to agree to speed up talks on an Acquisition and Cross-Servicing Agreement (ACSA) under which the SDF and the French military would supply fuel and food to each other. The move is intended to strengthen cooperation on such matters as joint exercises and U.N. peacekeeping missions. ACSA pacts generally outline procedures for the reciprocal provision of fuel, food and water, among other materials and services, between the SDF and foreign militaries. Security-related laws that took effect in March 2016 have also enabled the SDF to provide ammunition to other countries. Japan has signed ACSA pacts with the United States, Britain and Australia. Negotiations are also under way with Canada.