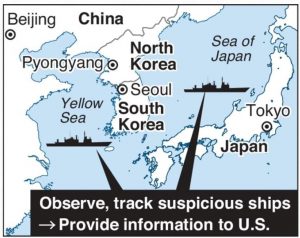 Maritime Self-Defense Force vessels and patrol aircraft have been conducting vigilance and surveillance activities in the Yellow Sea west of the Korean Peninsula and in the Sea of Japan since late last year to deter North Korean attempts to smuggle refined petroleum products and other items through ship-to-ship transfers on the high seas, The Yomiuri Shimbun has learned.

The government will promote cooperation with the international community on the matter by also utilizing the U.S.-led Proliferation Security Initiative (PSI), the multinational framework to prevent the proliferation of weapons of mass destruction.

It is the first time the Self-Defense Forces have taken part in a mission to crack down on smuggling at sea — a method North Korea exploits as a loophole in the U.N. sanctions. The SDF activities aim to further strengthen international pressure on North Korea.

According to government sources, Japan and the United States share the mission in different areas in the Sea of Japan, while Japan is solely engaged in activities in the Yellow Sea, the officials said.

If MSDF vessels, including destroyers, and patrol aircraft spot suspicious ships on the high seas, they track those ships and monitor their movements.

Because the SDF’s authority to forcefully inspect foreign ships on the high seas is restricted, the SDF takes photos of suspicious ships and collects other data, and then provides the United States with the information through the U.S. forces. Since vigilance and surveillance activities began, the SDF has monitored and tracked suspicious ships in some cases, but has not confirmed smuggling by North Korea so far.

“We consider it [the mission] an extension of the vigilance and surveillance activities previously being conducted in waters around Japan,” a Japanese government official said. “We are monitoring ships from a long distance to prevent any untoward eventuality.”