The Japan Coast Guard is considering adding up to four new base facilities in Japan for seven large-scale patrol ships, which are to be newly built. The new bases would make it possible for the JCG to swiftly deal with an increasing number of intrusions by Chinese government vessels in Japan’s territorial waters around the Senkaku Islands in Okinawa Prefecture and illegal operations of North Korean fishing boats in the Sea of Japan, according to JCG sources.

After consulting with local municipalities, among other procedures, the JCG intends to start constructing the bases within fiscal 2019, the sources said.

There are only two facilities under the agency’s jurisdiction where several large patrol vessels of over 1,000 tons are able to dock — Yokohama and Ishigakijima island in Okinawa Prefecture.

According to the sources, four candidate locations have emerged for new bases — Tsuruga, Fukui Prefecture, which faces the Sea of Japan; the city of Kagoshima, from where the JCG vessels could quickly reach the East China Sea and the Senkakus; Ishigakijima; and Miyakojima island in Okinawa Prefecture. 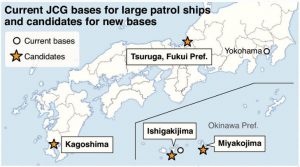 The JCG plans to construct docks suitable for its fleet of large-scale patrol ships at the new bases, and also build accommodation for crew members.

As there are nuclear power plants in Tsuruga, the JCG intends to strengthen its vigilance in the region against terrorist activities at sea.

The JCG earmarked about ¥300 million for the research costs of the new bases in the fiscal 2018 budget plan, and plans to select up to four candidates. The costs to build each base are estimated to be from several billion yen to more than ¥10 billion.

Currently, the JCG has about 60 large patrol ships, including two helicopter carriers of about 6,500 tons. As it has only two facilities that can dock several large-scale patrol ships, when conducting patrols it uses regional ports. However, it deploys two vessels at most at such port facilities.

Since the government nationalized the Senkakus in 2012, intrusions by Chinese government vessels in Japan’s territorial waters around the islands have become a serious problem, and in 2017, the number of illegal operations of North Korean fishing boats significantly increased. Therefore, the JCG has decided to build a total of seven large-scale patrol ships, including three 6,500-ton-class vessels, by fiscal 2021.

Amid mounting tensions in areas surrounding the Sea of Japan, the JCG judged it necessary to build new bases at key locations from which the JCG can dispatch a number of large patrol vessels.