Single-person households expected to hit 40% in 2040

TOKYO (Jiji Press) — One-person households in the nation are seen increasing to 19.94 million in 2040, accounting for nearly 40 percent of all households, a government-affiliated research institute said Friday.The number of people aged 65 or over who are living alone is forecast to total 8.96 million in 2040, accounting for 45 percent of all those living on their own, due to an increase in people in the age group who have never married, according to the National Institute of Population and Social Security Research, an affiliate of the Health, Labor and Welfare Ministry. 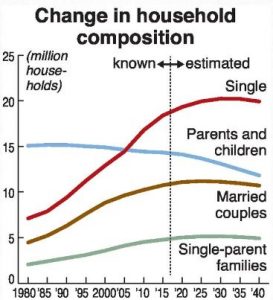 “Since the 1980s, it is not uncommon for people to remain unmarried,” an official at the institute said, adding, “These people will get old by around 2040, leading to a rise in the rate of elderly people living alone.”

The research institute updates household estimates every five years. The latest estimates are based on the 2015 census.

The proportion of households comprising married couples only is expected to rise from 20.2 percent to 21.1 percent, and that of single-parent families is forecast to climb from 8.9 percent to 9.7 percent.

By contrast, the proportion of families with both parents and one or more children is expected to fall from 26.9 percent to 23.3 percent. Such families accounted for over 40 percent in 1980.

The total number of never-married people in the age bracket is thus expected to increase about 2.7-fold from 2015 to 4.73 million in 2040.