The Yomiuri ShimbunThe government is considering temporarily evacuating Japanese and U.S. nationals and others in South Korea to Tsushima island in Nagasaki Prefecture via Busan Port, if airports in South Korea are closed due to a contingency on the Korean Peninsula, according to government sources. 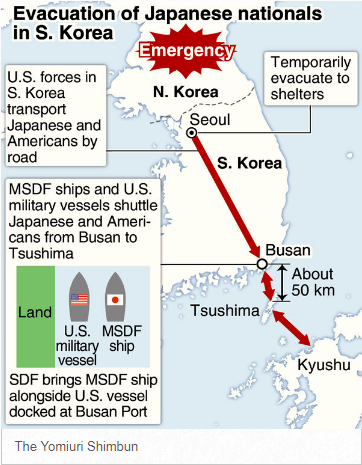 After temporarily evacuating people to the island with the help of vessels of the Maritime Self-Defense Force and U.S. forces, the government plans to then shuttle them to Kyushu, the sources said.

The South Korean government has not agreed to the dispatch of the Self-Defense Forces to its country, but a plan has surfaced to bring an MSDF ship alongside a U.S. military vessel docked at Busan Port and board Japanese nationals and others onto the MSDF ship.

In the case of a contingency on the Korean Peninsula, top priority will be given to people’s evacuation to Japan, according to multiple sources close to the Japanese government. In that case, the government plans to have the evacuees stay on the island, the Japanese territory located closest to Busan, for one or two nights.

As U.S. civilians residing in South Korea are also supposed to evacuate to Japan, the government intends to transport them on ships of the U.S. forces and the MSDF from Busan Port to Tsushima, and then take them by ship to Moji Port in Fukuoka Prefecture and other places in Kyushu.

The largest worry in the evacuation plan is that Japan has failed to obtain an agreement from South Korea for the dispatch of the SDF, due to deep-rooted opposition to the SDF within the country.

According to a source close to the Japanese and South Korean governments, negotiations with South Korea are at a standstill because the administration of South Korean President Moon Jae In is extremely reluctant to talk about issues associated with a contingency on the Korean Peninsula, in order to make the Pyeongchang Winter Olympics in February a success.

In autumn last year, when Tokyo sounded Seoul out behind the scenes regarding the dispatch of the SDF, South Korea did not agree to the docking of MSDF ships, but said that it would accept the docking of U.S. military vessels at Busan Port. Based on this, Japan’s National Security Council and others have been studying concrete transportation methods.

On Jan. 9, North Korea held ministerial-level talks with South Korea. However, the Japanese government believes that North Korea has no intention of stopping its nuclear and missile development, a senior Foreign Ministry official said. It is accelerating its efforts to create a concrete plan to evacuate Japanese nationals in South Korea in case of a contingency.

According to the Foreign Ministry, there are believed to be about 60,000 Japanese nationals and more than 200,000 U.S. nationals residing in South Korea.

As for the evacuation of Japanese nationals in South Korea, the Japanese government divides risks into four levels:

■ Japanese nationals are urged to avoid nonessential, nonurgent travel, such as sightseeing.

■ They are recommended to avoid all travel regardless of its purpose.

■ They are urged to evacuate immediately from the country.

■ They are evacuated or transported to shelters.

If South Korea comes under military attack by North Korea, the Japanese government will give top priority to evacuating all Japanese nationals to shelters across the country designated by the South Korean government. If the situation calms down within about 72 hours of the occurrence, Japan presumes that the U.S. military stationed in South Korea will transport them to Busan by land.