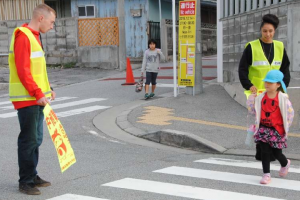 The local community had been concerned about ensuring that children can commute to school safely because their route has heavy traffic and vehicles, including those of U.S. military personnel, drive at high speed. According to the Okinawa Times, one of the service members involved in the volunteer activity participates almost every morning. Although he does not speak Japanese, he exchanges smiles and greetings of “ohayo gozaimasu” (good morning) with the children.

The leader of a residents’ association expressed his appreciation by saying that the community is home to many elderly citizens and they are grateful that the U.S. volunteers always work as crossing guards regardless of the weather. A woman whose grandchild commutes to a nearby kindergarten also expressed gratitude by saying that the service members are working hard.