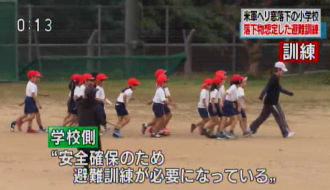 NHK reported at noon that an evacuation drill was held today at an elementary school in Ginowan, Okinawa, on whose playground a window fell from a U.S. military helicopter last month. The network said the evacuation drill was held under the scenario that an object fell from a military aircraft in an effort to resume using the school playground. According to the network, about 20 children participated in the drill, in which officials of the Okinawa Defense Bureau who have been deployed to the school as guards asked them to evacuate. The network said although the school has asked the U.S. military to never fly over the school, the U.S. military is responding that it will refrain from flying over the school “to the extent possible,” adding that the school believes it is necessary to conduct the drills in order to ensure safety.