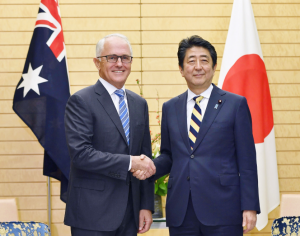 All national dailies reported on Australian Prime Minister Turnbull’s visit to Japan on Thursday. At their bilateral talks, Prime Minister Abe and his Australian counterpart reportedly agreed to deepen security and defense cooperation between their nations through increased joint exercises by the SDF and the Australian military. Abe and Turnbull confirmed a plan to accelerate negotiations on a new security pact stipulating the legal status of military personnel in each other’s nations. The two leaders agreed to ratchet up the pressure on North Korea to the maximum level. The prime ministers reaffirmed their shared goal of pursuing a “free and open Indo-Pacific” and agreed to promote quadrilateral cooperation with the United States and India in this regard. Ahead of their bilateral talks, Abe escorted Turnbull to the GSDF Narashino Camp in Chiba Prefecture and let him attend an NSC meeting. On the economic front, Abe and Turnbull agreed to work closely to seek the early effectuation of a TPP agreement by the 11 member states.