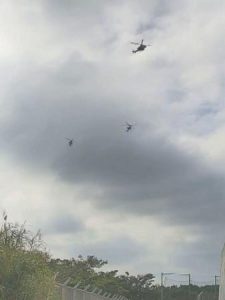 Photo provided to the press by the Defense Ministry

Asahi, Yomiuri, Nikkei, Sankei and Tokyo Shimbun reported in their city news sections and Mainichi on its front page that the Ministry of Defense announced on Thursday that it had confirmed that three helicopters belonging to the U.S. Marine Corps allegedly flew over the Futenma Daini Elementary School adjacent to MCAS Futenma on Thursday. This is the same school where a window fell onto the playground from a U.S. military helicopter on Dec. 13, 2017. The school had just conducted an evacuation drill on Thursday to prepare for the possibility of such incidents occurring again. Asahi wrote that Defense Minister Onodera reportedly told the press that the ministry’s onsite witnesses and footage from cameras installed at the school had confirmed that two AH-1 attack helicopters and one UH-1 multipurpose helicopter flew over the school at around 1:25 p.m.

Onodera reportedly said that he lodged a protest with Maj. Gen. Charles Chiarotti, deputy USFJ commander. Nikkei quoted Onodera as reportedly saying: “Flights should not have occurred over the school right after the drill was conducted. I conveyed the anger of Okinawa and the entire Japanese nation to the U.S. side.” Asahi quoted Chief Cabinet Secretary Suga as reportedly saying at a regular press briefing on Thursday that Japan will continue to ask the U.S. side to make efforts to avoid flying over the school, while Sankei quoted him as saying that it was very regrettable.