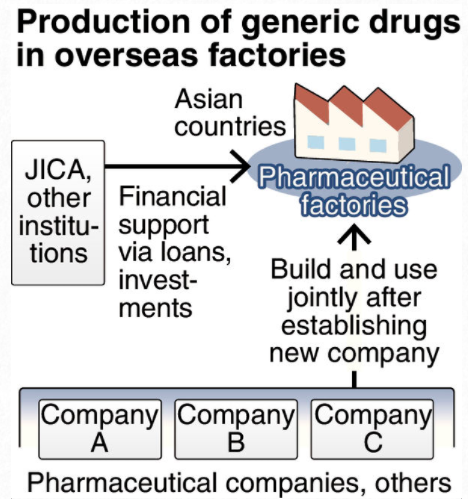 The government is planning new measures to help Japanese companies construct pharmaceutical factories in Asian countries, where labor costs are lower than in Japan, to encourage the production of more generic drugs, The Yomiuri Shimbun has learned.

The Headquarters for Healthcare and Medical Strategy Promotion chaired by Prime Minister Shinzo Abe is proceeding with the study, and will likely introduce measures as early as next fiscal year. It also aims to reduce drug costs, which reach about ¥10 trillion every year, by lowering production costs, and to strengthen the sales competitiveness of Japanese companies’ pharmaceuticals in the areas where the factories are located.

Joint companies newly established by multiple Japanese companies for the purpose of building and operating pharmaceutical factories in Asian countries would receive loans and investments mainly from the Japan International Cooperation Agency (JICA) and the Innovation Network Corporation of Japan.

Support from government financial institutions has already been introduced for private companies for the development of power generation and other forms of infrastructure, anti-poverty efforts, and help for start-ups. These endeavors will have the advantage of utilizing private companies’ funds, technology and know-how.

Generic pharmaceuticals are produced using the same active ingredients as the original drug, after the patent on the original drug has expired. Developing a new drug costs a minimum of tens of billions of yen, mainly for large-scale clinical trials, but generics, which have the same quality and effects, can be developed for much less because they use ingredients whose safety and effectiveness have already been confirmed.

Support may be limited to generic drugs for hypertension, hyperlipemia and mental illness, which are comparatively easy to produce from a technological aspect. For the purpose of preventing information leaks, it will exclude such drugs as those for infectious disease, cancer and other ailments, which require advanced technology. Relevant factories are likely to be located mainly in Thailand and Vietnam.

About ¥3 trillion was spent on generic drugs in 2016, while spending on drugs overall was about ¥11 trillion. Even today, generic drugs are about 40 to 50 percent cheaper than new drugs. But the government estimates that generic prices could be reduced to about one-third their current level by moving production bases to Asian countries.

If the rate of usage remains at the current level, drug costs could be reduced by an estimated ¥2 trillion. The government is also hoping to encourage the development of new drugs through price reductions.

The government also plans to call on pharmaceutical companies to take advantage of these measures to help them establish footholds for developing sales channels in Asian countries.

The government determined the basic policy for Asia Health and Human Well-Being Initiative in 2016, which promoted the expansion of exports of medical and nursing care services to Asian countries. It plans to incorporate strengthening the production of generic drugs by its next revision, which is expected in May or June.