Don’t call me, I’ll text you 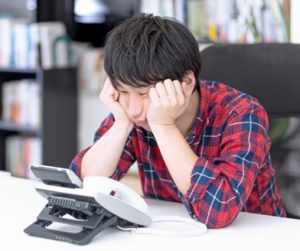 Even though Yo Noshita started working in an office almost a year ago, the 23-year-old still feels panicked every time the phone rings in his team’s workspace. According to an article in Tokyo Shimbun, he heaves a sigh of relief whenever someone else picks it up. “Phone calls are just so sudden,” he says. “I don’t want to be rude on a business call, so the prospect of the person on the other end of the line getting unhappy or upset because of a conversation with me is terrifying.” As an entire generation of young people now communicates mostly via smartphone, they have become so accustomed to texting one another that the ringing of a phone often startles them, according to Nikkei (6/15 & 7/24/2017), Tokyo Shimbun (12/18/2017) and Toyo Keizai Online (6/15/2017).

Even though they have no problem talking to people in person, Noshita and his peers feel extremely uncomfortable talking on the telephone. They are afraid of speaking to people they can’t see or don’t know because they usually only use their smartphones to communicate with people they know very well, such as friends and close relatives. Noshita can’t even remember the last time he used the landline phone at home. When communicating with friends, he uses email and chat apps, typically LINE. Whenever he needs to call a friend, he texts first to let the person know in advance. “I can check and edit texts and email before I send them. I don’t want to bother or annoy my friends by making sudden or inappropriate calls.” 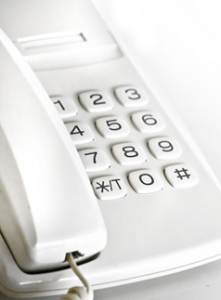 Nikkei speculates that “telephone phobia” is spreading among teenagers and young adults, noting that a 70% increase over the past 7 years in the number of applicants for an exam by the Japan Telecommunications Users Association (JTUA) to test knowledge of business telephone etiquette indicates that many youths may be living in dread of unexpected phone calls. Fear and dislike of the telephone has led some youths to become irritated when older people use the phone rather casually. A female company employee in her 20s cited by Tokyo Shimbun recalls a phone call she received from a male supervisor in his 50s when she was home sick. The manager asked about something that he could have easily figured out by checking the company’s website. She was dumbfounded that her boss was so insensitive to call her for that. 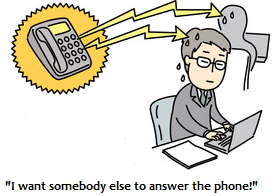 Some people who have an aversion to the telephone reportedly use the phrase “phone jerks” to describe people who place calls without texting a heads-up first. IT mogul Horiemon, who is very popular among local youths for his outspoken messages, triggered a controversy in the online community last year by advising young people not to do business with people who make phone calls on the grounds that they are wasting time. “Time is money for busy businesspeople,” says Horie, who argues that the telephone is inefficient since it requires the receiver to “synchronize” with the caller. “I don’t want my precious time wasted by unsolicited phone calls.” Adjunct Professor Atsushi Kotera of Toyo Eiwa Female College suspects that many youths steer clear of the telephone because email and chat apps are less stressful. The academic conjectures that they probably fear that if they make a phone call, the person on the other end of the line will dislike them and be angry that they wasted their time.

As some young adults even go so far as to quit their jobs to avoid answering or making telephone calls, local businesses are reportedly taking measures to cope with this shift in communication. Fukui Bank and other companies are providing a variety of training programs for new employees on telephone manners. A JTUA spokeswoman says that in order to overcome telephone phobia, people should expose themselves to what they are afraid of by calling and having conversations with family members and old friends whom they haven’t talked to recently. “The telephone is a tool to hear what the caller has to convey,” she says. “What is most important when speaking on the phone is to make the person on the other end of the line feel as though you are listening attentively.”