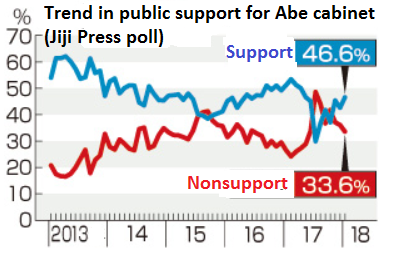 According to the January Jiji Press opinion poll conducted on Jan. 12–15, public support for the cabinet of Japanese Prime Minister Shinzo Abe rose 4.0 percentage points from December to reach 46.6% this month, while the disapproval rate declined 2.5 point to 33.6%. Expectations for the administration may have risen as a result of a move by the Democratic Party and the Party of Hope to create a joint parliamentary group without settling their differences over the security legislation.

Asked if they approve of the government’s decision to introduce long-range cruise missiles in light of the increasing threat posed by North Korea’s nuclear and missile development programs, some 49.6% said yes, exceeding the 38.3% who said no. The government is studying the ceremonies for the abdication by Emperor Akihito and the ascension by Crown Prince Naruhito. Some 57.7% said that the ceremonies “should be simplified and expenses should be kept down” while 31.7% disagreed.