Ambassador Hagerty says progress in U.S.-Japan trade to be seen by spring, ties stronger than ever

NHK reported multiple times on Friday evening on its one-on-one interview with Ambassador Hagerty, which was conducted earlier in the day in Tokyo. On the U.S.-Japan economic relationship, the Ambassador was quoted as saying: “Our national security partnership is deep and growing stronger everyday. And we need to see our economic partnership continue to strengthen in the same direction.” The network said the Ambassador also said that a working-level USTR delegation will visit Japan as early as this week to discuss creating a framework for negotiation for a possible trade deal with Japan. The Ambassador was also quoted as saying: “We will be able to settle on a specific framework to move forward. I think, certainly by the spring of 2018, we will be able to see forward progress and momentum.”

According to the network, the 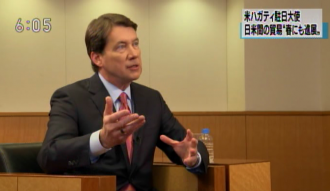 Ambassador also said that there has been a good deal of talk about the future of LNG exports to Japan and that such exports can increase. The Ambassador also reportedly said he sees great opportunity to have more innovative technologies coming from America to Japan in fields such as medical devices and expressed hope to expand U.S. exports to Japan.

NHK’s late-night news program “News Check 11” also took up the Ambassador’s interview, saying that the Ambassador expressed a strong will to expand U.S. direct investment in Japan. The Ambassador was quoted as saying: “We want to do our level best to make the U.S. the number one participant in that growth.”