#MeToo movement fails to take off in Japan 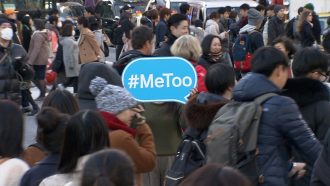 NHK’s “Close-up Gendai+” reported on the #MeToo movement that began in Hollywood and spread around the U.S., saying that women around the world are now beginning to speak up about their experiences of sexual harassment. The program said that although some Japanese women have also begun to speak up about their experiences, they often become isolated as a result. Women in Japan who speak up about sexual harassment have reportedly been criticized by others who blame them for “destroying harmony” or say that “they asked for it.” A lot of Japanese women are reportedly unable to talk about such experiences because they are afraid of “victim shaming.” The program also reported on the #MeToo movement in France.