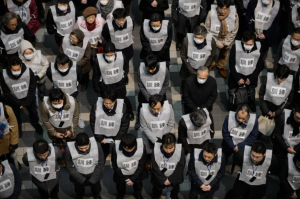 In a first for Tokyo, a disaster drill based on a ballistic missile attack was held Monday in response to the nuclear and missile threats from North Korea.

According to the Tokyo Metropolitan Government, about 350 participants attended, mostly residents.

“I think a drill is necessary. It’s a good thing. I see reports on North Korea almost every day,” said Tsuneo Yabe, 80, a participant from Bunkyo Ward.

“If a nuclear missile came flying at Tokyo, we have nowhere to hide. But as of now, North Korea is not stupid enough to push the button,” Moriyama said.

At 10 a.m. in Tokyo Dome City, an announcement imitated a J-Alert emergency advisory that would be issued in case of a missile launch.

“This is Tokyo Dome City. A missile has been launched. Those who are outside, please calmly evacuate to nearby buildings or underground passages. Those of you indoors, please remain in your position,” it said.

Right after the announcement, park staff stopped the rides and guided participants indoors. Similarly, participants near Kasuga and Korakuen stations and Bunkyo Civic Hall were guided to evacuate indoors or to underground passages.

All participants remained in position until it was announced that the threat had passed.

The drill was jointly run by the Tokyo Metropolitan Government, Bunkyo Ward, the Cabinet Secretariat and the fire department. The government has conducted 26 such drills in Japan, but Monday’s was the first to take place at subway stations and an amusement park.

Soon after the drill, Hiroyuki Suenaga, the Cabinet Office representative supervising the drill, explained the exercise had two objectives: to educate the public as to how people will be informed of an emergency, and to have them prepared to evacuate in 5 minutes. He said a ballistic missile could hit Japan as soon as 10 minutes after launch.

“Today’s drill educated people in the metropolitan area how they should react if a missile is launched,” Suenaga said at a review meeting held soon after the drill at Bunkyo Civic Hall.

Narushige Michishita, professor at the National Graduate Institute for Policy Studies, said the drill is not only effective in preparing people for emergencies, but allows the government to act stronger diplomatically against North Korean threats.

“If the people are more mentally prepared, it’s easier for the government to say, ‘We won’t surrender to North Korean threats.’ That gives it a diplomatic advantage,” Michishita said.

While emphasizing that a North Korean missile hitting Japan is highly unlikely, Michishita said Pyongyang could launch one under three scenarios: if it decides to threaten Japan for a diplomatic advantage, if war breaks out on the Korean Peninsula, and if the isolated communist regime gets desperate.

Even if one is launched, well-executed evacuations and the country’s missile defense system could help minimize the damage, he said.

The Cabinet approved in December a record-high defense budget for fiscal 2018 to beef up Japan’s missile defenses with the deployment of two Aegis Ashore missile batteries as an additional layer.

Conducting drills “in some ways is very logical,” he said.