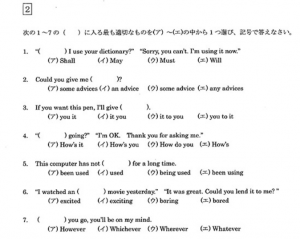 Thirteen-year-old Mina Okano entered Jumonji Junior High School in Tokyo after passing the English test in her entrance examination, thanks to attending a private elementary school that focused on English education.

“I’m glad that I made the best use of my English language skills for my exam,” Mina said.

With the nation preparing to place a greater emphasis on English education, the number of private junior high schools that will introduce or have introduced English tests in their entrance exams have surged to 137 this year, about a seven-fold increase from four years ago.

The figure accounts for about 30 percent of the private junior high schools in the Tokyo metropolitan area and the Kinki region.

The schools appear to be changing their exam system amid a heightened interest in English education, with the aim of making a strong appeal to examinees and their parents and guardians that they offer substantial English education programs.

The nation’s English language education is in a period of transition. From fiscal 2020, English classes will be officially offered to students at elementary schools and English tests in university entrance examinations are also in the process of reform.

However, some are questioning the trend of introducing English tests in entrance exams.

“Childrens’ English language ability is greatly influenced by overseas assignments of their parents and guardians as well as their home environment,” said Koichi Yamada, section chief of Hamagakuen, a major cram school based in Hyogo Prefecture. “It is likely to cause a sense of unfairness if English tests would be introduced in entrance exams.”

Jumonji Junior High School last year in Tokyo began introducing an entrance exam system that allows its examinees to take only the English test for an assessment of the applicants’ qualifications.

Those who get high scores will be exempted from about 700,000 yen ($6,300) including the entrance fee, the tuition fee for the first fiscal year and other fees.

Mina, who passed the exam, said her next goal is to pass the Eiken (Test in Practical English Proficiency) Grade 2 certificate.

Eiken is Japan’s largest grading system run by Eiken Foundation of Japan, a public interest incorporated foundation established in 1963. The level of examination ranges from Grade 1, the highest, to Grade 5.

Last year, the school set an examination with grammar questions, which was the equivalent of a level of Grade Pre-2, or a second-year Japanese high school level, coupled with a writing question that asks examinees to explain a scene depicted by a picture in about 20 words.

The average score of the examinees was about 80 out of 100.

Although only about 1 percent of the entrance test examinees take English entrance examinations at present, the rise in the number of those who take such exams in the future is expected.

“Ahead of the time when English classes will be officially offered to students at elementary schools, we anticipated the rise in families focusing on English education,” said Toshiyuki Takada, a spokesman for Ichikawa Gakuen Ichikawa Junior High School.

However, English classes in public elementary schools now only offer so-called “foreign language activities,” which provides opportunities for children to familiarize themselves with English through singing songs and playing games.

Under such circumstances, English testing in the entrance exams is difficult for most children.

An official of the international education section of the education ministry said the questions that will be included in the tests will depend on the schools.