31% say Abe is suitable to serve as next LDP president, Asahi poll

Ahead of the Liberal Democratic Party (LDP) presidential election this autumn, the Asahi Shimbun’s [nationwide] telephone survey, which was conducted on Jan. 20–21, gave pollees the names of four individuals expected to run in the election and asked them to select the person they thought suitable to serve as the next LDP president. Some 31% of respondents said Shinzo Abe was appropriate, making this the most frequently given response. Next was “none of the above” at 29%, followed by former LDP Secretary-General Shigeru Ishiba at 20%, Minister for Internal Affairs and Communications Seiko Noda at 8%, and LDP Policy Research Council Chairman Fumio Kishida at 6%.

When asked if they wanted to see Prime Minister Abe continue as LDP president from the autumn, however, voters were split, with 40% saying yes and 43% disagreeing.

[Polling methodology: The survey was conducted on Jan. 20–11 on a computer-aided random digit dialing (RDD) basis of voters nationwide with telephone calls placed by pollsters to landline and mobile phone numbers (for landlines, some districts in Fukushima Prefecture were excluded). Valid responses were received from 994 persons (out of 2,002 households found to have one or more eligible voters) for landline numbers and from 1,024 persons (out of the 2,036 persons found to be eligible voters) for mobile numbers. The valid response rates were 50% for landline numbers and 50% for mobile numbers.] 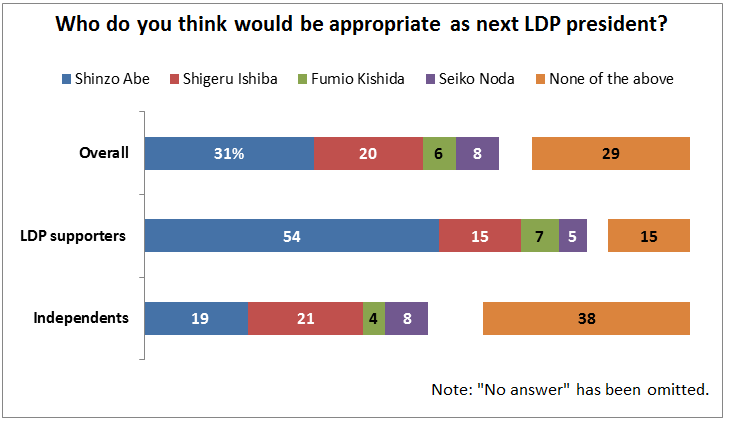