Can Shohei Otani succeed as both pitcher and hitter in MLB? 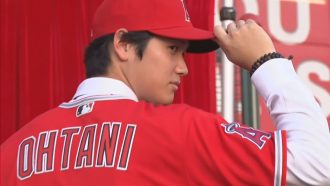 NHK’s “Close-up Gendai+” reported on 23-year-old Japanese professional baseball player Shohei Otani, who will join the Los Angeles Angels this year. The program said Otani, who was a star pitcher and batter for the Nippon Ham Fighters, is hoping to fill both roles for the Angels, although there has been no other two-way player in the MLB in years. The program reported on its exclusive interview with Angels General Manager Billy Eppler, who said he will make changes to the starting rotation to accommodate Otani as a two-way player. However, some U.S. observers wonder whether Otani will be able to succeed as a two-way player in America on account of the high level of play in the Majors.