The opinion poll jointly conducted by the Sankei Shimbun and Fuji News Network (FNN) on Jan. 20–21 revealed the Japanese people are very angry and frustrated with South Korea’s Moon administration. Some 90.8% of pollees said they find President Moon Jae-in’s new policy on the Japan-South Korea agreement on the comfort women “unacceptable,” and 88.6% said that they “support” the Japanese government’s policy to not comply with additional requests from South Korea [on this matter].

A plurality of 80.5% of respondents said that South Korea is not trustworthy as a partner in foreign affairs and economic activities. Moreover, 58.3% said that pressure should be prioritized more than dialogue in relation to North Korea, which persists in developing nuclear weapons and missiles.

The support rate for the Shinzo Abe cabinet was 52.6%, up 5.1 percentage points from the previous poll (conducted on Dec. 16–17, 2017). It looks like people highly regard the Abe administration’s handling of the comfort women issue and North Korea.

At the Japan-South Korea Foreign Ministers’ Meeting on Jan. 16, Foreign Minister Taro Kono sharply protested Seoul’s new policy on the [2015] Japan-South Korea agreement on the comfort women issue. At a press conference on Jan. 22, Deputy Chief Cabinet Secretary Yasutoshi Nishimura said, “Japan will seek to have the South Korean government steadily implement the [2015] agreement. We have no intention of budging even a single millimeter on the agreement.” The percentage of respondents who said they consider South Korea “untrustworthy” was lowest among those in their teens and 20s, with 63.4% of men in this age group and 62.7% of women deeming their neighbor untrustworthy. The percentage rose with the age group, with 88.7% of men “age 60 or over” deeming Seoul untrustworthy.

Some 54.6% of respondents said the Seoul-Pyongyang agreement to field a joint [women’s ice hockey] team and to march their athletes together under a unified flag at the opening ceremony of the PyeongChang Olympics was “undesirable.” Meanwhile, some 72.9% of respondents said that they “don’t think” the Seoul-Pyongyang agreement will lead to North Korea’s halting its development of nuclear weapons and missiles.

Meanwhile, some 49.5% said that Prime Minister Abe “should attend” the opening ceremony at the PyeongChang Olympics, edging out by a small margin the 43.1% who said “there is no need for him to attend.”

[Polling methodology: The survey was conducted until the calculated number of responses was obtained by placing telephone calls on a random digit dialing (RDD) basis adjusted to the gender and age composition of each survey area. A total of 1,000 men and women, aged 18 and over, across the nation were surveyed. The survey was conducted on Jan. 20–21, 2018.] 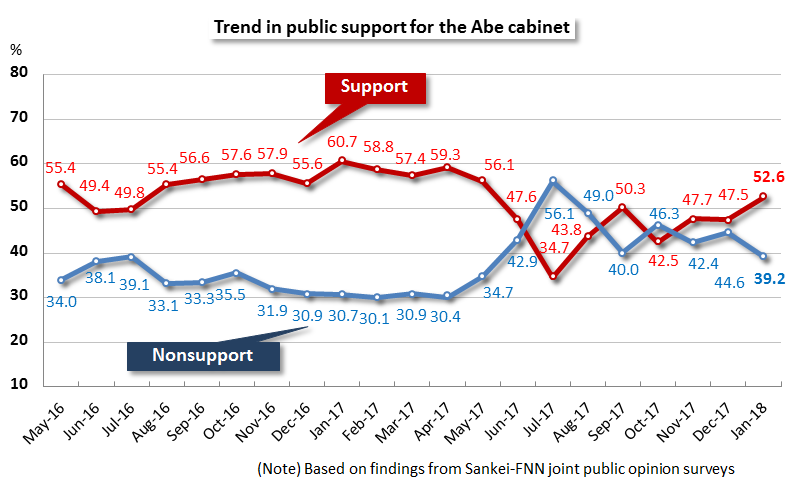 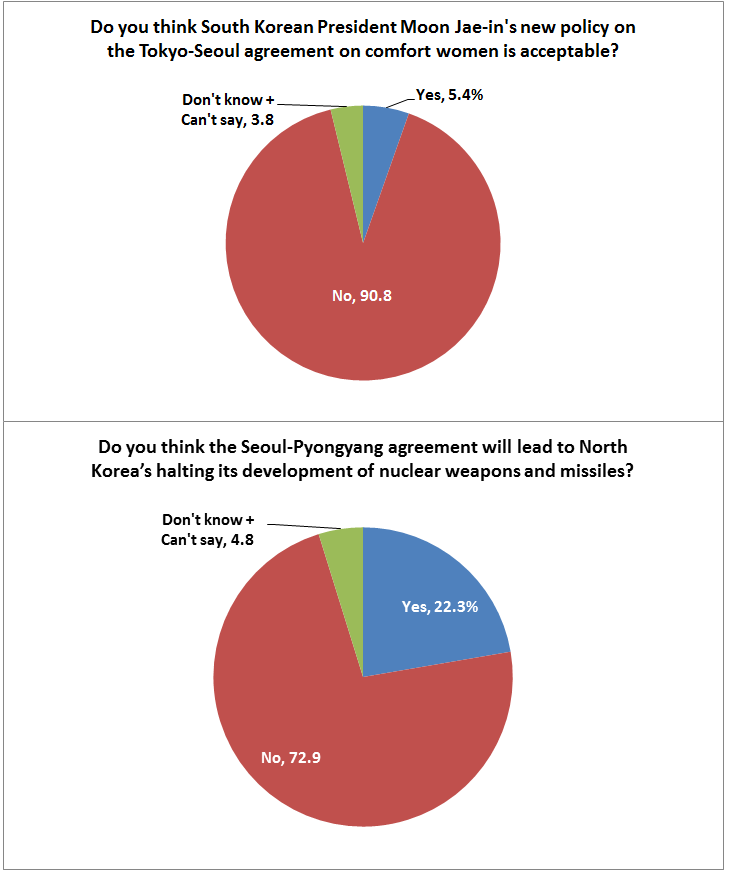