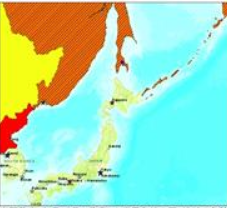 The U.S. Statement Department published an online travel advisory on Jan. 10 with a global map showing countries and regions color-coded according to one of four levels of danger. On the map, the four Northern Islands, which are inherent parts of Japan, were color-coded not as “degree of danger 1 (exercise normal precaution),” the lowest level, which applies to Japan, but as “degree of danger at 3 (reconsider travel),” which applies to Russia, the Sankei Shimbun learned.

When the Sankei Shimbun asked the State Department if it had changed its stance on the Northern Territories, a department official stressed that “the map does not represent a policy change” and explained to that the color-coding was corrected.

As for the reason why the department changed color-code of the Northern Territories to that of Russia, the department said, “There were some technical problems,” but offered no further clarification.

In the online map published by the U.S. Central Intelligence Agency on its homepage the Northern Territories are color-coded as part of Japan with the annotation “Occupied by the Soviet Union in 1945, administered by RUSSIA, claimed by JAPAN.”