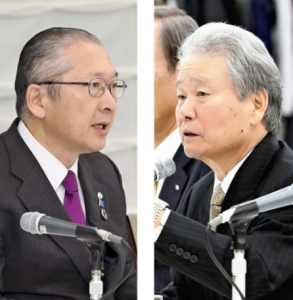 The leaders of the Japan Business Federation, or Keidanren, and the Japanese Trade Union Confederation (Rengo) met Tuesday morning in Tokyo to discuss ways to negotiate a pay raise in this year’s shunto spring labor-management wage talks.

Keidanren has stated a numerical goal of a 3 percent pay hike, which was basically welcomed by Rengo. However, a perception gap was seen between the two sides over Keidanren’s approach of raising employees’ pay on an annual basis, and on some parts of the government-led work style reforms.

“We’re asking [member companies] for a positive approach to pay hikes while being conscious of the social expectation to achieve a 3 percent [pay raise],” Keidanren Chairman Sadayuki Sakakibara said at the beginning of the meeting.

Rengo President Rikio Kozu said afterward, “We share a unified outlook regarding an overall direction.” However, Rengo has demanded a pay hike of around 4 percent on a monthly basis through the combination of a 2 percent pay scale hike and a periodic pay increase. “We won’t consider 3 [percent] as the uppermost limit,” Kozu said.

Full-fledged talks will begin between representatives of workers and employers of major companies, aimed at the day when management is to make a response in mid-March.

This marks the fifth year in which the government has asked employers to raise pay. The average pay raise for leading companies has stood at the 2 percent level so far.

Some major companies have already announced hikes of 3 percent or higher for the 2018 shunto, and pay growth this year is expected to be higher than in 2017, when the average hike among leading companies was 2.34 percent.

As part of work style reforms, one of the main topics of this year’s shunto will be how employers and employees at each company tackle overtime work regulations and productivity growth. Kozu expressed his idea to actively enter into negotiations on those issues.

Both labor and management agree on the necessity to regulate overtime work and achieve productivity growth, but disagreements also remain.

Labor strongly urges companies to introduce a so-called working-hour interval system, which is designed to secure a certain length of time between the time workers leave the office and the next time they come to work. The government’s work style reform bill says companies are obliged to make an effort to introduce it.

However, management is wary, with a Keidanren official quoted as saying that the interval system “doesn’t fit with the reality of current work styles.”

According to a Health, Labor and Welfare Ministry survey, only 2.2 percent of the companies surveyed had adopted such a system, and about 60 percent said they had no plan to introduce it.

In regard to a “post-hourly wage” system that is not based on working hours but on performance, Sakakibara expressed a positive attitude by saying at the meeting, “How companies will respond to this system is an important theme.”

However, after the meeting Kozu said, “A difference of opinion between labor and management again emerged.” Those differences are expected to make the shunto negotiations difficult.