Why don’t more Japanese study abroad? The cost and the hassle, survey shows 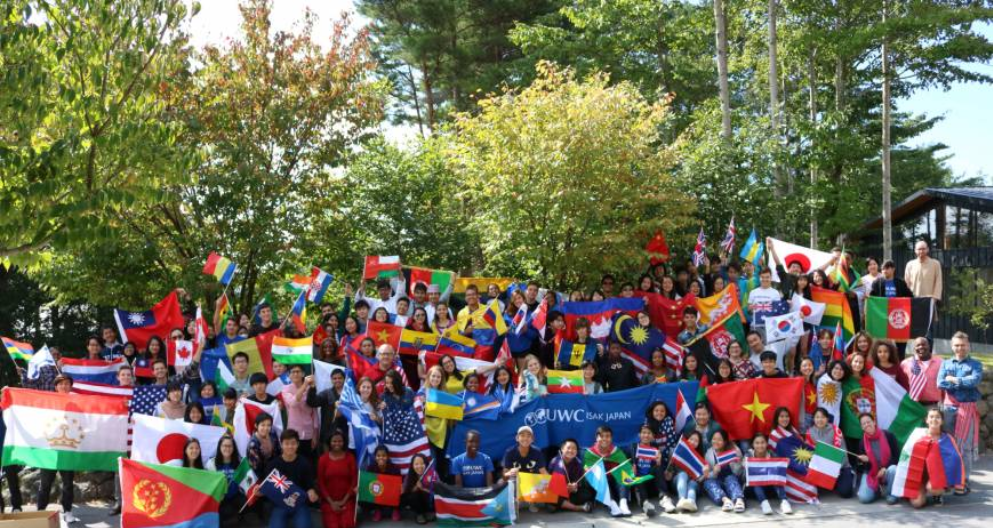 Exception that proves the rule: UWC ISAK Japan students are eligible for the Davis UWC Scholars Program, which provides need-based grants of up to $20,000 per year to graduates attending any one of 94 partner institutions in the U.S. But students at most other schools in Japan who hope to study abroad lack this kind of support. | COURTESY OF UWC ISAK JAPAN

On a chilly, wet Saturday in November, I made my way over to Senzoku Gakuen, a renowned private all-girls junior and senior high school located almost equal distance between Tokyo and Yokohama. I had been invited to assist at a college fair sponsored by the school together with a nonprofit that does these things — the U.S. College Alumni Network of Japan (USCANJ).

Hundreds of Senzoku students preened in their noble Dartmouth green blazers and sweaters filed into the school’s impressive daikōdō, or grand auditorium, where the privileged youths joined students from nearby schools and interested parents for four hours of presentations and panel discussions by polished alums promoting their elite alma matres.

The Princeton rep powered up his PowerPoint by pointing out that his university had been at the top of the U.S. News and World Report rankings for umpteen consecutive years. Another rep talked about his decision to choose Middlebury College in Vermont over the University of Tokyo. Graduates of Bryn Mawr College in Pennsylvania discussed the leadership opportunities accorded women in an all-female environment.

However, the elephant in the room — the omnipresent hindrance hardly given any attention during the entire event — was money. How much is all this going to cost? How can these expenses be managed?

Too costly, too much hassle

Many readers might think that parents who can afford to send their children to Senzoku or one of its private counterparts can easily manage the costs of an overseas college. However, if you dig deeper you discover that not many Japanese high school students are matriculating to multi-year undergraduate programs at universities outside Japan. In fact, only three of Senzoku’s nearly 250 graduates took the challenge in 2017, and an enlightening new study reveals that cost is the primary reason why most students throughout Japan are deciding to stay put.

The study was conducted by Christina Nikitin, a dual Japanese-Russian national raised and educated inside Japan and currently in her first year at Stanford University. As a student researcher at Tokyo Academics last summer, Nikitin administered detailed surveys to nearly 50 Japanese students who had seriously considered attending four-year colleges overseas but ended up enrolling instead at Japanese universities, mostly Tokyo, Waseda, Keio and Sophia. The respondents had an average TOEFL iBT (Test of English as a Foreign Language Internet-based Test) score of 99 (80th percentile), and 65 percent had previously lived overseas for more than a year. They had graduated from public and private schools all over Japan, and those who had taken the SAT averaged in the 92nd percentile — i.e., they had scored higher than 92 percent of all test-takers.

Respondents submitting applications overseas had been accepted at many fine schools, including Chicago, Johns Hopkins, Brown, Cornell, Williams, Bowdoin, Smith and Bard (all in the U.S.), King’s College London and Yale NUS (Singapore).

Students who chose not to submit any applications to overseas schools cited being chiefly influenced by cost. A lack of information and worries over English ability were the two influences that followed.

Those who did apply overseas but decided to stay in Japan were also primarily persuaded by cost. For this data set, the two influences that followed financial worries raised some eyebrows: 1) comparison of the overseas universities offering admission with the Japanese universities doing the same, and 2) recognition/acceptance of the overseas schools by those in Japanese society (e.g., in employment, social settings, etc.).

A number of respondents sat for personal interviews with Nikitin and stressed the extensive lead time — often more than a year — usually required to prepare for the extensive application process. According to Neil Nguyen-Huu, the founder of Tokyo Academics: “It’s like taking on an additional full-time job. A few schools are staffed with admissions counselors or others who can serve as a student’s advocate, but many kids find themselves flying solo — facing reams of research, scores of sample tests and heaps of essays, not to mention a need for continuing excellence in coursework, projects and activities. Moreover, many of these kids find that they need to convince their own stakeholders that overseas study is a wise direction.”

In this survey, accepted students, all of whom had only Japanese citizenship, reported receiving an average of $30,000 in financial aid that would not need to be repaid. And their parents were willing to contribute just over $25,000/year on average, leaving the student with a shortfall of around $15,000 (i.e., $70,000 (total annual cost) minus $30,000 (financial aid) minus $25,000 (parents’ contribution)).

As can be expected, families with higher incomes were willing to contribute more for college expenses. And families with lower incomes could afford much less, resulting in a shortfall rising far above $15,000/year.

Schools such as Harvard (5 percent acceptance rate), Yale (6 percent), Princeton (7 percent), MIT (8 percent), Amherst (14 percent), Yale-NUS (7 percent) and the Abu Dhabi campus (19 percent) of New York University are known to be very generous with financial aid for international applicants. However, as can be seen by their acceptance rates, competition for entry can be harsh, and a TOEFL iBT of 99 and an SAT in the 92nd percentile — the averages in this study — are most likely not going to get a student into these schools unless that kid has some truly spectacular talent — for example, being a virtuoso on the violin. And even then, the TOEFL score would probably need to be higher.

But what about the academically adroit middle-class teen who is offensively tone-deaf but has a demonstrated passion in the chemistry lab that has resulted in a Smith College acceptance — one that comes with a significant financial shortfall?

Some help is out there

There’s some hope. The Class of 2021 was the first to benefit from the exorbitantly generous Yanai Tadashi Foundation scholarship, which provides four years of funding of up to $70,000 a year.

The original intention was for open applications for 10 scholarships in 2017, with a handful more being given to students recommended by schools preselected by the foundation. But after personally speaking with the 37 candidates invited to interview, Yanai was apparently so taken by the passion of the youth that he loosened his purse strings to put all the young achievers on jet planes to higher education overseas (26 kids from the open application, 11 recommended by the select high schools). For the Class of 2022, the current intention is for open applications for 20 scholarships, with an additional number being awarded based on recommendations from the preselected schools.

Another resource is the Grew Bancroft Foundation, named after two former U.S. ambassadors to Japan. For over 60 years, this organization has been providing financial grants to Japanese seeking a liberal arts education in the U.S.

Certain schools can also be very benevolent. UWC ISAK Japan, a Karuizawa-based three-year international boarding high school that recently became the 17th school under the United World Colleges umbrella, provides its students with remarkable financial aid. Seventy percent of those attending the high school do so with scholarship support, and after matriculating to university, the backing often continues. All UWC students around the world are eligible for the Davis UWC Scholars Program, which provides need-based grants of up to $20,000/year to graduates attending any one of 94 partner institutions — basically the top 94 colleges in the U.S. And those 94 schools often cover any additional financial need demonstrated by the student.

A matter of privilege

I left Senzoku pondering what the alumni get out of events such as college fairs. The charitable men and women I met — all volunteers — had given up most of a Saturday to travel in the rain to a function that in all likelihood resulted in only a handful of applications. The representatives were proud, enthusiastic, and reflective — admirable, talented professionals obviously wanting to share the transformative experiences that had helped shape their being.

But I also wonder how many kids in Japan lacking the advantage of privilege can realistically pursue this opportunity of overseas study. I would hate to think that these college fairs are simply funneling kids of privilege to universities of privilege. Would the have-nots even be aware of these events, and if any did actually make the effort to attend, would they be frightened away by the horrifying costs?

Satisfaction does not only come from some faraway place, though. The Nikitin study indicated that 78 percent of respondents who decided to matriculate to Japanese universities were either extremely or somewhat satisfied with their decision to stay in Japan.

For simplicity, an exchange rate of ¥100 per U.S. dollar has been used for currency conversions. A related article by Michael Hassett, “What to Expect When Applying for College Overseas,” may also be useful for those considering higher education outside Japan. The author can be contacted at mshassett@gol.com. Christina Nikitin: cnikitin@stanford.edu. Neil Nguyen-Huu: neil@tokyoacademics.com.